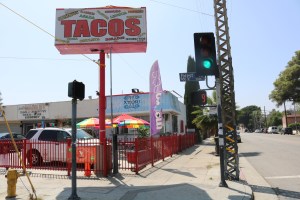 Situated on the tiny corner of Forest and Wabash avenues near the Northern edge of Boyle Heights, X’tiosu Kitchen, with its bright baby blue signage, is a unique restaurant that offers a culinary blend of Oaxacan and Lebanese food.

X’tiosu, pronounced SH-TEE-OH-SUE, means “thank you” in Zapotec, a group of languages spoken by one of Mexico’s largest indigenous ethnic groups. Owned by brothers Felipe and Ignacio Santiago, its culinary roots are in Oaxaca. The brothers arrived in the United States 14 years ago and started working in the restaurant industry as dishwashers. They eventually rose in the ranks and became chefs.

In October 2017, they opened X’tiosu. Veterans of cooking for Lebanese restaurants in Los Angeles, they had come up with the idea of combining Oaxacan and Lebanese flavors while catering a baby shower.  “We were preparing the food, and that’s the first time we combined the ingredients, which is the food that we’re now serving,” Felipe Santiago said. 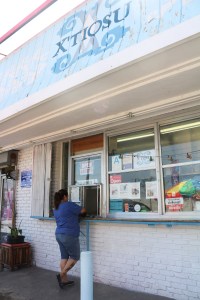 It first attracted my attention after visiting Malabar Library across the street and seeing that a new restaurant had popped up in the same place in a strip mall as others before it. The location had previously been home to a carnitas restaurant, several burger joints, a taco stand and a restaurant that sold tacos and burgers. None had lasted.

In Boyle Heights, you usually find food places that serve staples of Latino culture ­–tacos, seafood and other Mexican favorites— as well as some fast food chains and Chinese and Thai restaurants. This spot is different.

On the menu, “Oaxacan” is followed by “Arabesque,” referring to Lebanese food. The brothers mix the best of both worlds in one amazing flavor.

As we approached, the scent of chicken grilling filled the air, reaching the restaurant’s parking lot. The smell guided me and my family past red tables and benches to a menu taped to one of the windows. We ordered a chicken shawarma combo plate and another combo plate consisting of chicken, beef and chorizo kabobs. We got eggplant baba ghanoush on the side, baklava à la mode for dessert and two aguas frescas, both mango-flavored.

As we waited for our order, a woman and her son were finishing their meal when we overheard her say, “These tacos are delicious with great flavor!” 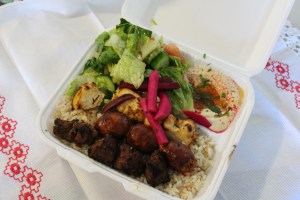 It piqued our interest in the chicken shawarma tacos they were eating, and we debated whether to get some. We decided against it, but when we picked up our order, the two owners gave us a free chicken shawarma taco to taste. The taco was topped with cilantro, onion and two small slices of pickled radish, which provided a neutralizing flavor. 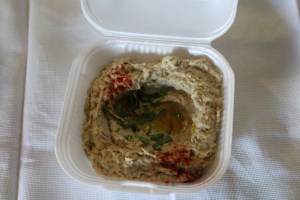 I was excited to try the chicken shawarma, as it was the first thing I had smelled as we approached X’tiosu. It was made with the same chicken shawarma as the taco, which had proved to be delicious. The chicken had a nice, grilled taste and was juicy and tender. It came with steamed white rice and Mediterranean green salad, which included cucumbers, tomatoes and mint bathed in garlic-lemon extra virgin olive oil dressing. You could really taste the lemon in the salad. It also included a serving of hummus, which had a delectable tangy taste, giving it an excellent balance of flavor. 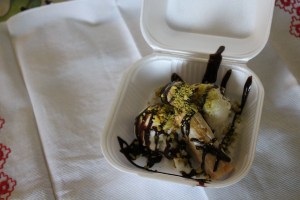 The combo plate came with three kabobs as well as white rice, Mediterranean salad and hummus. The beef was evenly grilled and succulent, with a nice flavor. The grilled chicken lacked the scrumptious flavor of the shawarma. However, the chorizo kabob had an authentic Oaxacan taste, which combined well with the traditional Lebanese flavors of the other kabobs.

The baba ghanoush ­–a dish of whipped roasted eggplant— was flavored with spices, citrus flavoring and tahini, a sesame seed-based sauce traditional in Middle Eastern food. It was a good dish that compliments the flavors of the combo platter and worked great with the pita bread provided on the side.

Then came the baklava, a traditional dessert with its roots in Turkey. It is made from layers of filo–-thin, unleavened dough, common in Balkan cuisine. At X’tiosu, it was covered in a rich chocolate syrup and served with two scoops of vanilla ice cream, providing a sweet end to a delicious meal.

With X’tiosu Kitchen’s fusion of Oaxacan and Lebanese flavors so different than that of the food commonly found in Boyle Heights, I admit I was wondering how it would taste. But as I came to find out, it had an amazing flavor. If you want something new on your plate, then go to X’tiosu.