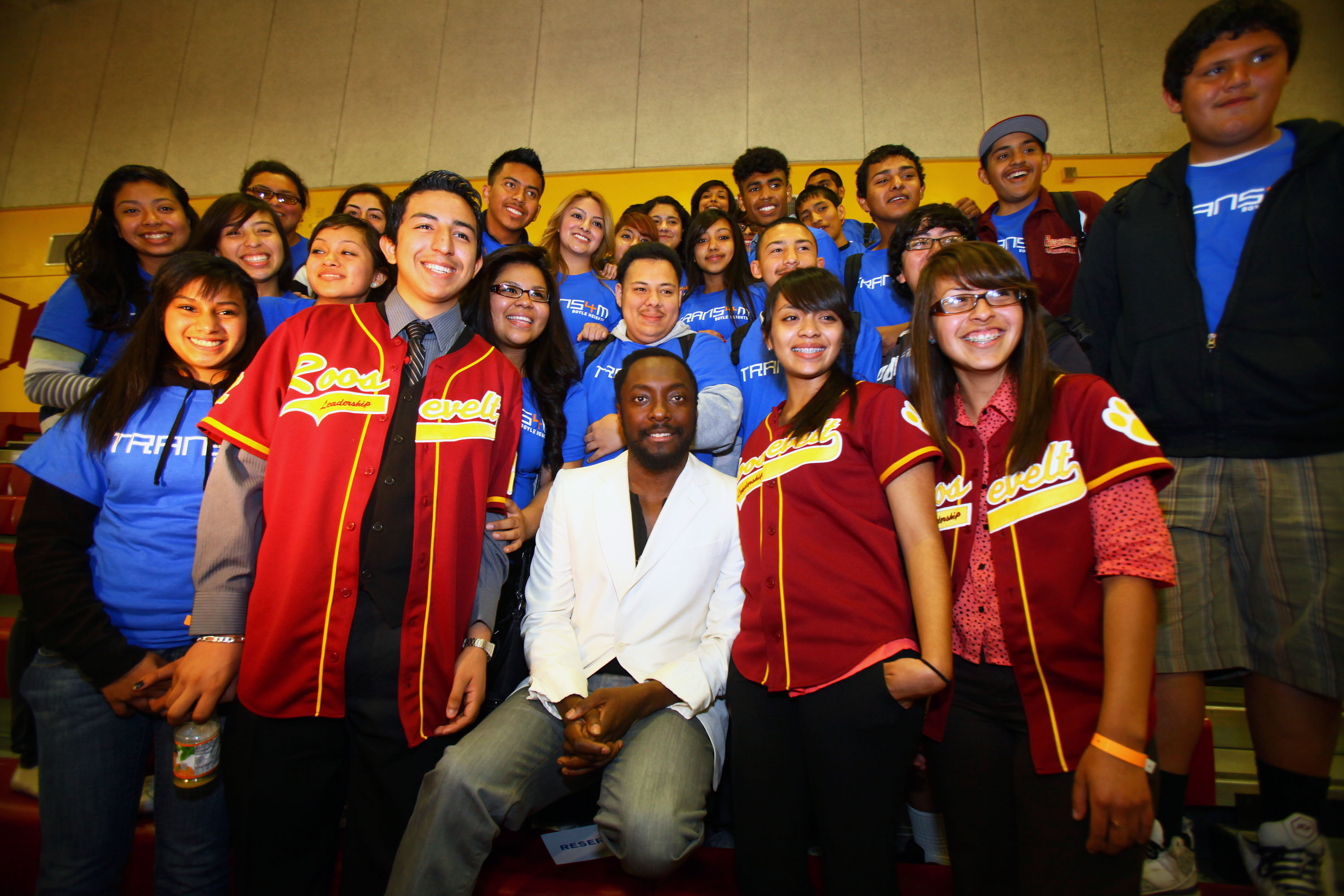 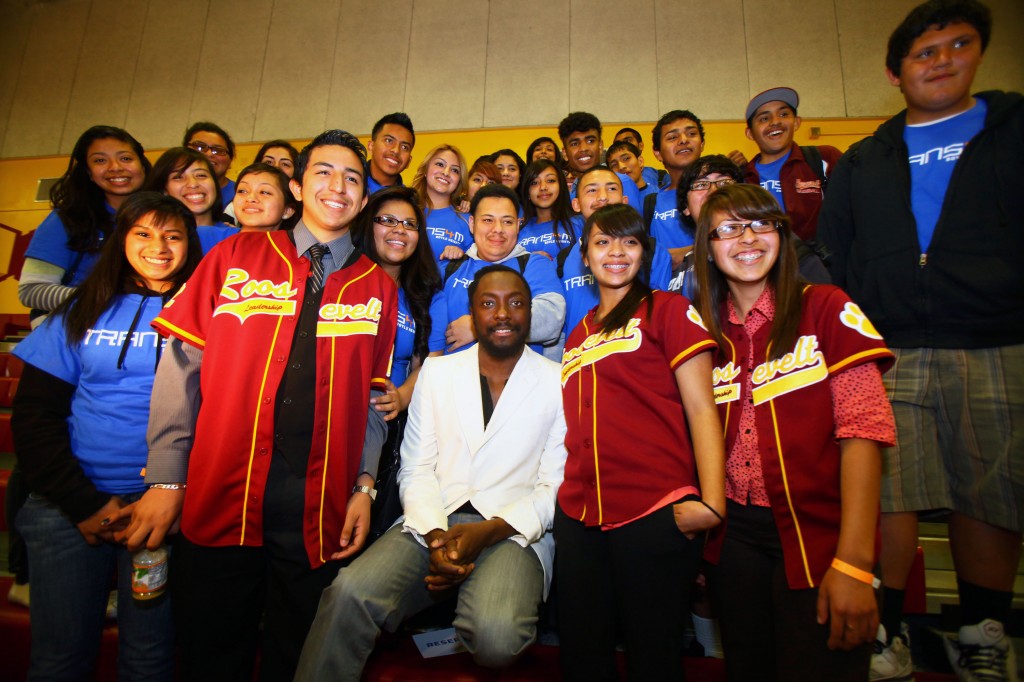 Whether producing the next top-rated song, coming up with a recycling idea for Coca-Cola, singing to sold out crowds or heading up creative innovation at Intel, will.i.am keeps returning to the neighborhood where he was raised: Boyle Heights.

College Track provides extra math courses and tutoring; teaches marketable skills in the arts and digital media; and guides students into careers in science, technology, engineering and math. The i.am.college track program serves 60 freshmen in Boyle Heights, and will add 60 freshmen each year until 240 students are enrolled. The musician’s i.am.angel foundation is investing $1 million over the next four years into the Boyle Heights College Track program.

Thirty-eight-year-old will.i.am, called Will by his friends, was born and raised in the Estrada Courts housing project in Boyle Heights, along with two brothers and a sister. At the time, there were few African American families living in the predominantly Latino community.

That might have been difficult for some families, but not for will.i.am’s.“It was amazing growing up as one of the only black families,” says will.i.am. He was raised by his mother, Debra Cain, a soft-spoken, private woman, and his uncle, Donny, both influential role models. He never met his father, William Adams. Cain credits the people in the neighborhood for helping to keep an eye on her son.

“Boyle Heights was an ideal community at the time because he was sheltered by a lot of the neighbors” who made “sure he didn’t get into different things,” says Cain.

Cain encouraged her son to follow his dreams and avoid gangs and drugs. He became interested in music when he was eight, and she always supported him. Their relationship “goes way beyond mother and son,” she said. “It’s like we’re best friends.”

Will.i.am credits his mother’s strength for his accomplishments. Today, he often takes her on trips. In January, he took her to President Obama’s second presidential Inauguration. While they were there, he sent a series of tweets: “Took my mama to the White House and every step I took I wanted to cry…I’m so proud of our past. My mom did a good job…I could have been doing something totally different…but she raised me right…thanks mama.” 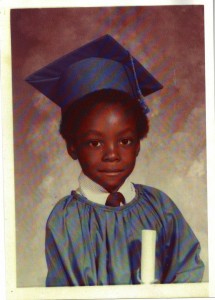 will.i.am in the 4th grade. Photo courtesy of the family.

“My mom never thought when were growing up in Boyle Heights that we would go to the White House and go with the President to the Inauguration,” will.i.am says. “So to show that to my mom was amazing.”

Will.i.am learned about giving back through his mother’s example. Although she now lives in the San Fernando Valley, she still volunteers five days a week at Costello Park Recreational Center in Boyle Heights, where she has worked with young children since 1996.

Cain believes it’s important to “get involved… and come back.” At the same time, she thinks that parents also should “give your kids the opportunity to see the world outside of your neighborhood.”

Enrique Legaspi, a teacher at Hollenbeck Middle School and a childhood friend of will.i.am’s, serves as chief of staff of the i.am.angel foundation. He, too, sees will.i.am’s community connection and family as keys to his success.

While many kids his age were getting involved in gangs or drugs, will.i.am was doing “battles” with poetry. Legaspi remembers how as kids they used to share their poetry at the Peace and Justice Center at Belmont High School. “Will was the best one of the best freestylers while growing up,” he says, “and you want to be around the best. That’s why we all hung out together.”

Will.i.am was inspired to focus on improving educational opportunities in Boyle Heights after seeing the documentary “Waiting for Superman,” which portrayed Roosevelt High School as a dropout factory. “I knew my neighborhood was bad, but I didn’t know it was that bad,” he says.

In the film, he was struck by the need to wait for a fictional character, “Superman,” to help. Instead he says, “We can all be agents of change. We are all supermen and superwomen.”

For will.i.am, College Track embodies the connection he has with his community and his hopes for young people from the neighborhood. “The ‘hood’ doesn’t need to be the ‘hood,’” he said. He hopes to “inspire change in the psychology of people in the neighborhood.” Will.i.am says youth are the “leaders that will change tomorrow.” He wants them “to realize they are part of a task force.”

In February, Will.i.am brought together business leaders, innovators, community organizers, educators, scientists and Roosevelt students in Los Angeles for his annual TRANS4M America conference. For almost a decade, will.i.am has used the conference and a benefit concert to raise awareness and funds for charitable causes. He says the conference aims to “provide unexpected perspectives, deep thought, real work and access to incredible people so that we can better collaborate to transform our world. Without transformation,” he adds, “we know what the future of Boyle Heights will be.”

Former President Bill Clinton, a keynote speaker, spoke about issues affecting Boyle Heights and low-income neighborhoods around the country. Clinton remarked that in his travels around the world, he has found that “talent and intelligence are evenly distributed, and it’s a crime to repress them.”

The former president congratulated will.i.am and his foundation in Boyle Heights and stressed the importance of community. “If I could do one thing,” he said, “I would change the mindset of everyone to understand that we can’t achieve an individual dream without community.”

This same sentiment guides will.i.am and his family. Will.i.am says it is not a choice, but an obligation, to give back. “Community is family. You can have family outside of blood. Community is education. You learn from your environment. Community is kinship.”