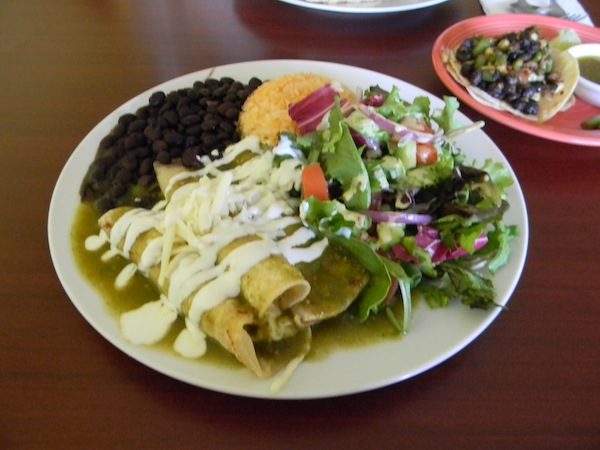 Editor’s note: This is an edited repost of a story originally published in 2015. See new information below about store hours and current offers during coronavirus emergency.

UPDATE: Un Solo Sol owner Carlos Ortez has begun an emergency relief fundraising campaign through gofundme, to help his business stay open during the crisis. In the post, Ortez said that although the business has remained open, “daily Net Sales continue to be extremely low and our capacity to bring employees back to work is still an impossible task.  Bills and business debt payments have not been made due to lack of funds.” The campaign is trying to raise $5,000. More information here.

With reporting by Juliet Villegas

While vegetarianism and veganism have been gaining popularity around the country, these trends are lagging behind in communities like Boyle Heights. Over the last few years, however, some local businesses have begun to cater to this growing niche market with vegan and vegetarian menu options.

There are few restaurants that offer this in Boyle Heights, since many traditional Hispanic foods include meat and dairy products.

Un Solo Sol Kitchen is one of the few restaurants that offer these healthy choices. Owner Carlos Ortez, a vegetarian, says that his restaurant honors the Mexican-American culture, but also vegetarian-focused cultures around the world.

The moment you open the menu you see foods that are familiar to Mexican culture, such as enchiladas and tacos. However, as your eyes keep looking down the pages you find foods like gormeh sabzi, fatteh, and bok choy soup, which come from other cuisines. As you further inspect the menu, you notice vegetarian and vegan options below almost all of the foods.

Ortez says his restaurant serves vegan and vegetarian foods to promote a healthier eating option for a community that has a high rate of health problems, such as diabetes and obesity. “It’s not only a healthy option, but an eclectic option,” said Ortez.

The vegan/vegetarian trend has been growing rapidly over the last decade in America. According to a Harris Poll for the Vegetarian Research Group in 2013, more than 7.3 million Americans identified themselves as vegetarian, with 42 percent between the ages of 18 and 34. Ortez says the majority of his vegetarian customers are between the ages of 25 and 35.

Different motivations
But even though vegetarian and vegan diets are gaining popularity, some people are still unaware of the difference between them. Vegans eat a strict plant-based diet and avoid anything that may potentially harm an animal when it is being made. Vegetarians also follow a plant-based diet, but often eat dairy or eggs. Some common reasons people cite for becoming vegetarian or vegan include health, moral or religious concerns.

Heather Tonkins, a certified nutritionist in Los Angeles, says there are many health benefits of vegetarian and vegan diets.

“A vegetarian and/or vegan diet tends to be lower in saturated fat and higher in fiber, phytonutrients and antioxidants, and this type of diet may decrease the risk of obesity, heart disease, high blood pressure, diabetes and certain types of cancer,” says Tonkins.

There are some risks, though, she notes. “Embracing a vegetarian and/or vegan diet means that one’s intake of vitamin B12, vitamin D, iron, calcium and zinc may be lower,” says Tonkins, “ so supplementation may be recommended.”

Kristen Sheline is a teacher at Hollenbeck Middle School who has been a vegetarian for 27 years. She realizes that it’s possible to be an unhealthy vegetarian by binge eating junk food instead of eating nutritious foods. “You have to be really careful.”

A common mistake that new vegetarians make is to unknowingly neglect the proper nutrients they need and substitute starched-based foods for meat.

Challenges
That’s what restaurateur Ortez did the first time he tried to eat strictly vegetarian food. He began eating meat again, but when his cholesterol began going up, he renewed his vegetarianism. This time around, he pays more attention to getting the proper nutrients.

Sheline says that eating out can be challenging when you are a vegan or a vegetarian.

“No one else in my family is vegetarian except me, so it inconveniences people,” says Sheline. “They have to make sure they have something that I can eat if they invite me over.”

Even so, the benefits outweigh the obstacles for many vegetarians.

“I think I’m healthier because I don’t eat meat,” says Sheline. “ I don’t have high cholesterol. I don’t have heart problems. I’m staying true to what I believe in.”

Un Solo Sol is part of Connect Boyle Heights, a local collective promoting local businesses during the coronavirus emergency. The restaurant on 1st Street (across the street from Mariachi Plaza) does not offer delivery but has a designated parking spot for safe, easy curbside pickups.

According to its social media posts, the restaurant takes phone orders and offers a 20% discount for pick up and take out orders (does not apply to online orders). Delivery orders are taken through third party provider Doordash.

This post was updated on April 13 to add information about gofundme fundraising campaign.