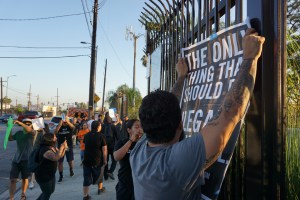 Nearly two dozen protesters showed up to Thursday’s “grand opening” of Asher Caffè and Lounge on Boyle Avenue near Whittier Boulevard, holding posters calling out the shop’s owner as an anti-immigrant, Trump supporter while marching and chanting outside the business.

Protesters responded to a “hood alert” on Facebook and Instagram by Defend Boyle Heights, a coalition of community-based organizations against gentrification in Boyle Heights, about restaurant owner Asher Shalom. The alert included screenshots of various tweets from 2016 and 2017 that were retweeted by Shalom’s personal Twitter account. These retweets appear to express Shalom’s support for Trump and his immigration policies during his presidential campaign and after he took office. 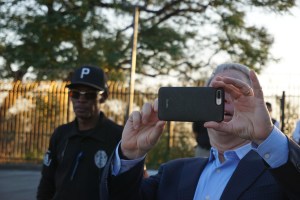 Shalom also owns Asher Fabric Concepts, a highly successful fabric and textile distributor that has had its showcase in Boyle Heights since 2015. Boyle Heights Beat tried unsuccessfully to reach Shalom at the restaurant. Various calls from a reporter on Friday were placed on hold and never picked up. 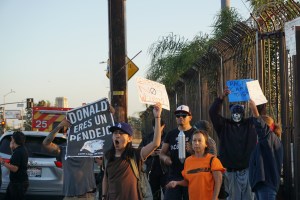 “I want folks who drive by here on Boyle and Whittier every day and see Asher Caffè and Asher Fabrics to know that these are not businesses that are going to benefit our community,” says Meza. “We hope to educate the public and cause a little disruption to show Asher Fabrics and Asher Caffè that they’re not welcome here in Boyle Heights.”

The protest began at 7:00  in the afternoon with around 10 protesters who created posters and signs outside of the restaurant. Some police officers and security guards were already stationed outside the business. More people came as the protest progressed.

Protesters carried signs with messages ranging from “Racism not kosher in Boyle Heights” to “Gentrification not welcome,” while loudly chanting to drivers passing by and those who arrived for the shop’s grand opening. Protesters chanted “Say it loud, say it clear, immigrants are welcome here” and shouted “Gentries get the f*ck out.” 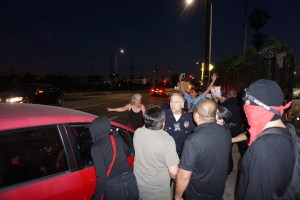 The group shouted at and surround cars entering the business’s parking lot. Police officers guarded the customers, making sure they would get in and out safely.

As the event progressed, more community members dropped by to show their support of the protest. Ending at around 9:00 in evening, the protest saw over 20 in attendance.

A few days before the protest, the Boyle Heights Chamber of Commerce rescinded Shalom’s membership and returned his paid dues. Jennifer Lahoda, the Chamber’s president, said that action was taken because of a pair of anti-immigrant posts on Shalom’s Facebook page that chamber members were made aware of. 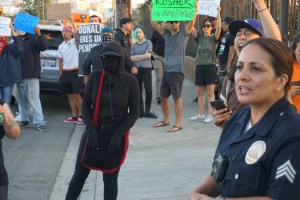 “We rescinded his membership Tuesday because of public statements he made regarding immigrants that are not in line with the chamber’s values and objectives,” Lahoda said.

Someone who identifies as David Shalom responded to an Instagram post by Defend Boyle Heights, defending Asher Shalom. “He is not a racist,” the comment reads. “He loves his immigrant employees and friends. He is an immigrant himself. Also, he supports legal immigration and promotes it — not illegal immigration though.”

It was not clear if David Shalom is related to the local business owner.

In 2017, Defend Boyle Heights also protested the opening of Weird Wave Coffee, calling it a “gentrifying business.” A year after the protest, the business is still open and has recently begun selling pizza alongside it’s original menu.

All photos by Alex Medina.