Boyle Heights is already one of the city’s densest neighborhoods, and plans to build more than 5,650 new homes over the next two decades may forever reshape its landscape. 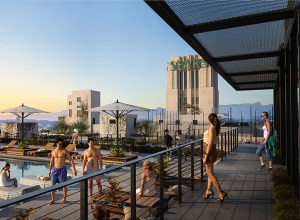 Expensive high-rises and high-end shops and eateries on one edge and “affordable” apartment complexes and a new supermarket on the other could effectively split Boyle Heights into two zones divided by the I-5 – one for the well-to-do, the other for the working poor.

Over 5,000 of the planned apartments will be in two huge developments near Olympic Boulevard and Soto Street, in the southwestern corner of Boyle Heights, which developers refer to as part of downtown Los Angeles. Most rents will be market rate, with 3,200 condos for purchase. According to Trulia, a real estate website, the median rent for an apartment in Boyle Heights is $2,500, compared to $7,500 downtown. 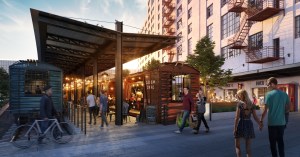 The Station, an outdoor coffee shop part of the Sears Tower development.

Only 400 apartments–just eight percent – are to be leased at “affordable” rates to families and individuals who meet federal low-income guidelines. They will be built by nonprofit developers, mostly along a one-mile corridor between First Street and E. César E. Chávez Avenue, from Mariachi Plaza to Evergreen Cemetery. Some will be set aside for people with special needs, such as homelessness or mental illness, with on-site services provided. Several will have some retail space, 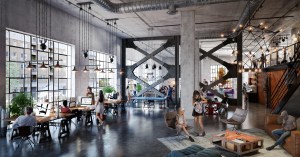 None of the projects planned by the nonprofits could match the housing impact of two private mega developments planned for a small zone south of the 5 Freeway. The historic Sears building at East Olympic Boulevard and Soto Street is being transformed into a luxury residential and commercial complex that will include 1,030 lofts, 80,000 square feet of shopping and dining, 200,000 square feet of “creative offices” and a rooftop pool, among other amenities. 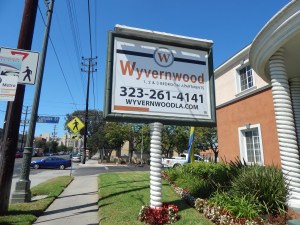 No construction date has been announced. (In November, the real estate news website The Real Deal reported that the developer has all the permits needed to begin construction of a Phase 1, which includes the Sears Tower. The site reported that Shomof is looking for an investment partner for Phase II.)

Not far away – east of Soto on Olympic – the owner of the Wyvernwood Garden Apartments plans to raze the 1,200 two-story garden apartments and build 4,400 new units in 24-story high-rises, including 3,200 condos and 300,000 square foot of retail and commercial space.

The $2 billion project envisioned by The Fifteen Group, a Miami developer, will also provide 25,000 square feet of community meeting space and a 10.5-acre park. Fifteen percent of the units – 660 apartments – will be designated as affordable housing for 30 years.

“The reimagined Wyvernwood site will offer a variety of modern housing options for all income levels, creating a dramatic improvement over the aging and outdated buildings on the current site,” the developer’s website says.

If built as planned, the new Wyvernwood would be one of the biggest housing complexes in the West, but its original opening date of 2020 has been delayed, in part by opposition from longtime residents who fear displacement.

Many of the affordable units will be built and managed by the East Los Angeles Community Corporation (ELACC), a non-profit developer and property owner that has operated for 22 years in Boyle Heights. Its most recent development is Cielito Lindo, a 50-unit complex at First and Soto streets that opened in April. 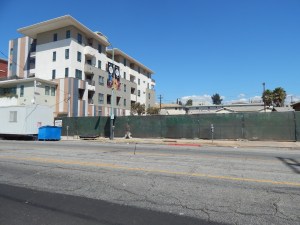 Most of ELACC’s apartments rent to families and individuals earning between 30 percent and 50 percent of the area’s median income ($29,050 to $48,450 for a family of four). At an ELACC development, a family of four could pay between $560 and $933 for a two-bedroom apartment. But even those rents are unaffordable for many in Boyle Heights, where almost 40 percent of households earn less that $20,000 annually, according to the Los Angeles Times.

ELACC has three projects in the pipeline that will add 154 units.

Edward Reyes, ELACC’s vice president of community capital, said ELACC seeks input from community members throughout the housing planning process. He said the organization is working with Jóvenes Inc., another Boyle Heights nonprofit, to provide services to 18-25-year-old homeless youth at its Lucha Reyes Apartments. “We wanted to make sure that we had the ability to house as many folks as we could in a large community that hasn’t had the necessary assistance,” he said.

Not far from there, along the neighborhood’s traditional business corridor, two affordable housing complexes are to be built on Metro-owned land. La Veranda and Chávez Gardens will stretch from Soto to Mott on East César E. Chávez. Abode Communities, a non-profit community developer, will develop them.

La Veranda will rise behind the popular King Taco restaurant near Soto and César Chávez. A block over, on Fickett, the proposed Chavez Gardens will have 60 units, a community park and a grocery store. 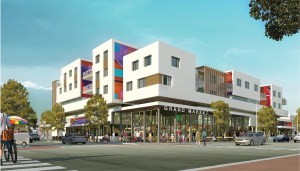 “We heard loud and clear the desire to have a grocery store in the neighborhood,” said Robin Hughes, president and CEO at Abode Communities. He said the complex would provide on-site services for adults and youth and be environmentally sustainable, both in design and operation.

“I hope that our affordable housing can really support the catalytic economic development that’s happening in the community,” she said. “For us, it’s really important that it provides an opportunity for people who currently live in the community to stay in the community, and that’s why affordability is important.”

Photo above: Sears Tower at the intersection of Soto and Olympic on the southwest edge of Boyle Heights. Photo by Ernesto Orozco.