Editors note: this post will be updated with reporters’ notes throughout the #LAUSDStrike.

On Friday, Roosevelt High School senior Andrea Galdámez interviewed Roxana Dueñas, the ethnic studies teacher from her school that was chosen as the image for the strike campaign by the teachers’ union, United Teachers LA.

Dueñas told Galdámez that she was honored to have been picked by artist Ernesto Yerena for the posters, and that she was humbled by the experience.

On Thursday, students continued to report on declining attendance at their schools. Senior Carmen González posted this on Twitter about her school, Méndez High:

Our admin after they dismissed the 36 kids that attended school pic.twitter.com/9y2Yzm5Eeb

A young source at Bravo High School, student Kazi Salsabil, sent our reporter Naomi Pedraza these pictures of a near-empty cafeteria at Bravo Magnet.  Our Andy García said his sources told him that the full attendance for the school that day was only 98 students. 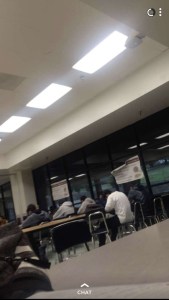 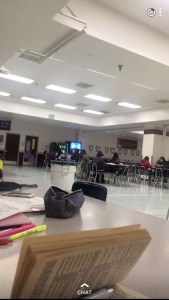 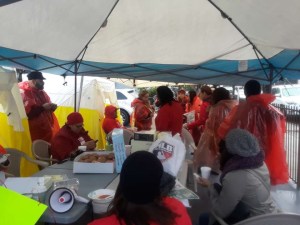 The woman, Leticia Burgoin, said she was a former teacher at Sheridan and now teaches at Bridge Street Elementary, another Boyle Heights School.

“Just because we’re at a public school, it doesn’t mean that [our students] don’t deserve the same as the charter schools,” she told Gárate. 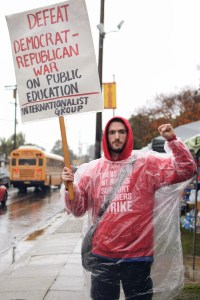 On Tuesday, Roosevelt senior Andrea Galdámez covered the teachers’ rally in front of the California Charter Schools Association. She filed this report:

Our reporter Andrea Galdámez @galgamez_ went out to a rally on Tuesday morning and talked to some of the striking teachers. Listen to her report on the second day of the #LAUSDStrike https://t.co/OnNx4Laga3 pic.twitter.com/VAo1jRcMTw

A student at #RooseveltHigh sent this photo of students playing chess or just hanging out at school gym on day two of #LAUSDStrike #BoyleHeights pic.twitter.com/WnURKvhG45

On Monday, about 31,000 members of United Teachers Los Angeles (UTLA) walked out of their jobs, the first strike by Los Angeles teachers in over 30 years. Teachers’ demands include smaller class sizes, more support staff and better pay. Bargaining with the Los Angeles Unified School District had broken off the Friday before.

Carmen González, a senior at Méndez High School, reported Monday that despite the rain and cold weather, striking teachers at her school were upbeat.  She found that local vendors had donated coffee and snacks for teachers and their supporters: 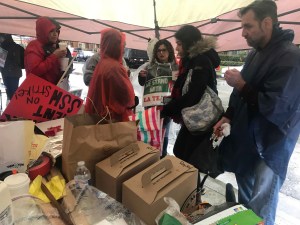 González noted that only 106 students –less than 10% of the student body– attended that day:

Attendance was reportedly higher at Francisco Bravo Medical Magnet, where Noemí Pedraza saw a group of 11th graders crammed in the school library. 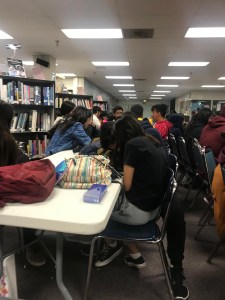 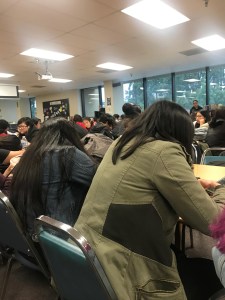 Pedraza noted that students at her school were asked to fill out “characteristics” surveys such as this one:

A collaborator from Stevenson shared a brief video of students there at the school gym:

On the first day, strikers and supporters marched from City Hall to the LAUSD headquarters in downtown Los Angeles. Roosevelt High School senior Luisa Gárate was there and provided some photos: 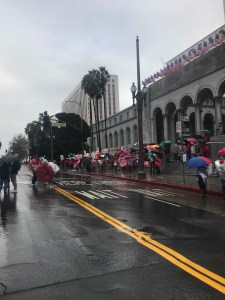 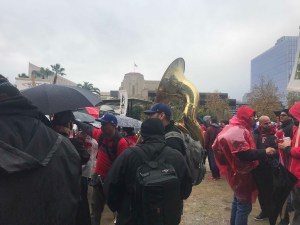 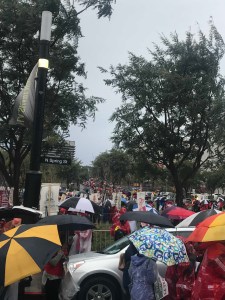 Photo above: LAUSD teachers and supporters protest on first day of strike, on January 14, 2019. Photo by Óscar Vargas.