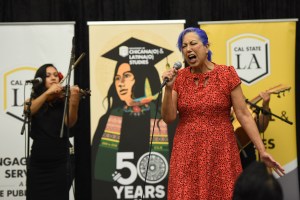 The musician, author and feminist may soon have her wish. Bag premiered the song Thursday at a Cal State Los Angeles ceremony commemorating the 50th anniversary of the first ever Chicano Studies program, where Huerta was being honored. In it, the punk artist (and Cal State LA alumna) sings that there are plenty of monuments to men, but that it would be important for young girls to see a woman’s name immortalized. 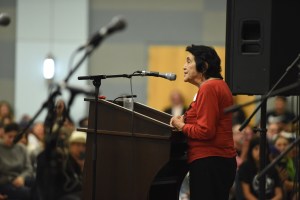 Minutes before, the famed labor leader and co-founder of the United Farm Workers (UFW) union had delivered the semester’s inaugural address. Speaking extemporaneously, the energetic 88-year-old regaled students with anecdotes from her famed life and what she called “a little bit of history” –details on how early meetings of what was to become the UFW happened at César Chávez home, at the corner of Folsom and Fickett, in Boyle Heights.

“Did you know the Chicano Movement started here in Los Angeles,” she asked students, as she told the story of the 1947 grassroots campaign to elect Edward Roybal to the Los Angeles City Council, and of the organizing done at the Community Service Organization (CSO) in Boyle Heights. 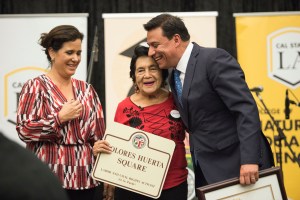 Alice Bag’s performance with the Trio La Victoria brought the house down. Following, Los Angeles City Councilmenber José Huízar presented Huerta with a certificate of recognition and announced that the intersection of First and Chicago Streets in Boyle Heights –the site of that CSO– will be renamed Dolores Huerta Square.

Huízar said he would present an official proclamation at Friday’s City Council meeting “where I’m sure it will be approved unanimously.”

But the councilmember added that he was moved by Alice Bag’s tribute, and that lyric. Huízar promised that Los Angeles will have a street named Dolores Huerta, and that it would be a street in Boyle Heights.