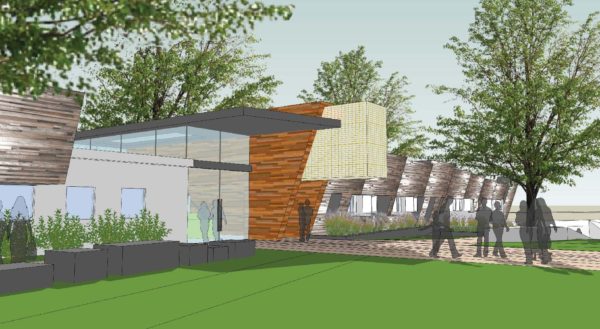 The long awaited $5 million renovation of Legacy LA’s headquarters in Boyle Heights is closer to becoming reality, following a groundbreaking ceremony held this month at the Hazard Park Armory.

The renovation project –scheduled to take place in several phases over the next three years– will transform the 66-year-old military installation into a state-of-the-art facility to serve at risk youth in Ramona Gardens and other areas of Boyle Heights.

“The Legacy LA renovated facility will be a beacon of hope for youth living in Ramona Gardens, historically one of the most under-resourced communities in Los Angeles, where joining a gang was the norm,” said Lou Calanche, Executive Director at Legacy LA, in a press release. “Our goal is to make college graduation the norm.” 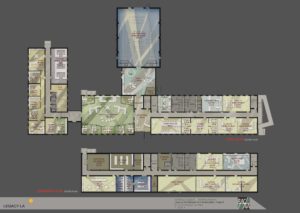 Calanche told Boyle Heights Beat that construction on the first phase of the project –on the building’s first floor– is set to begin later this month and completed by October 2017. At an estimated cost of $3.3 million, it will include the removal of walls to create a large open space and offices in the North wing and a computer lab, tutoring and mentoring center and other rooms in the South wing.

Calanche said Legacy has secured almost $3 million of the funds for phase one and is on target to secure the additional funds needed to renovate the 30,000 sq. ft. dilapidated facility. So far funding has come from government sources –from both the County and City of Los Angeles and the City of Vernon– but the non profit is targeting private foundations for donations.

The second phase of the project, slated for 2018 to 2019 at a cost of $750,000, will renovate the armory’s basement and create media arts facilities, recording studio and dance room, plus add an elevator.

A third phase will add a black box theater at a cost of $950,000 and a fourth and final phase will bring an outdoor amphitheater, plaza and connecting walkways to Hazard Park, at an estimated cost of $350,000. 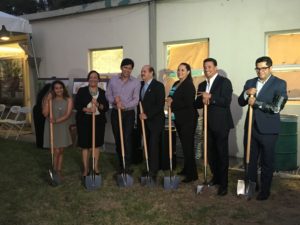 Built in 1950, the Hazard Park facility was a functional armory until 2005 when it was turned over to the City of LA Parks Department under Congress’ Base Realignment and Closure (BRAC) Program. Legacy LA has occupied most of the building since its founding in 2007.

“From helping Legacy LA secure a 50-year lease at the Hazard Park armory, to securing hundreds of thousands of dollars for its renovation, I could not be prouder that this day is finally here,” said Councilmember José Huizar in a statement. “I am happy to partner with Legacy LA, and I remain committed to prioritizing youth services in the City of Los Angeles.”

Photo above: a rendering of the planned front entrance of the Hazard Park Armory, which will  house youth development programs run by Legacy LA. All photos provided by Legacy LA.