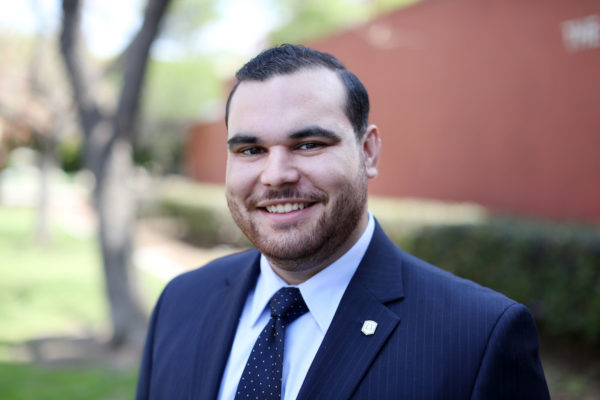 JP Aguirre wants to use business to make a positive impact in the world.

The 26-year-old Boyle Heights resident tapped into his experience studying finance at California State University, Los Angeles to launch a startup company with his sister that sells handmade huarache sandals. A portion of sales is used to help Mexican nationals who were deported from the U.S. and are stranded at the border. The company purchases bus tickets for deportees hoping to return to their families across Mexico.

“It’s about being able to wake up in the morning and knowing you’re helping out and making the world a better place,” says Aguirre, who will graduate with a 3.87 GPA and a Bachelor of Science in Business Administration with an option in finance and a minor in economics. He will begin a job at JPMorgan Chase & Co. after graduation.

At eight years old, Aguirre came to the United States with his family. Throughout his life, he saw how hard his parents worked and how much they sacrificed to build a better life for him and his sisters. His father left a job as a dentist in Northwestern Mexico to work as a janitor in California. Through sponsorship by his father’s employer, Aguirre’s family was able to gain residency.

Those memories were front of mind for Aguirre when it came time to choose a major at Cal State LA. He wanted to be as marketable as possible in the workforce.

While he has a keen interest in finance, Aguirre isn’t shy about admitting it’s not his passion. His passion is finding ways to do as much good as possible.

He was inspired to start his company, Two & Twenty, after a day of his internship with the Los Angeles City Employees’ Retirement System when he was able to sit in on a meeting with former Massachusetts Gov. Deval Patrick. Patrick, now with Bain Capital, discussed social impact investing—putting money behind ideas and businesses that serve the public good.

Aguirre considers that meeting a turning point. Soon after, Aguirre took a trip to Mexico with his sister. They visited local vendors and decided to start a company that would import and sell artisanal leather huaraches.

So far, Aguirre and his sister, Isela, who is a social worker in Los Angeles, have helped about 20 people who were stranded in border towns near Tijuana.

“As a company founded by Mexican immigrants, we feel a responsibility to give back and help those in need,” the siblings say on their company’s website.

The company’s name comes from the investment term “2 + 20,” a standard compensation structure for hedge fund managers—charging 2 percent of the assets managed and 20 percent of profits. Aguirre gets a laugh out of finance professionals when they hear the name, but it’s taken on a deeper meaning, too.

The “two,” Aguirre says, has come to represent the pair of feet that wears the sandals sold. And the “20,” represents the locations they’re helping to send the deported immigrants to, based on a common radio code Aguirre remembers using as a lifeguard.

Aguirre appreciated how the courses he took in the College of Business and Economics at Cal State LA equipped him with knowledge and theories he could put into practice through his internships at companies, such as Southern California Edison and at the Los Angeles City Employees’ Retirement System (LACERS).

Through his internships he learned the importance of hard work and networking. Aguirre made such an impression at LACERS that every investment intern since has been a Cal State LA student, he says.

Aguirre credits his internships as well as mentors, staff and professors at Cal State LA with helping him succeed. He was a member of the Beta Gamma Sigma Honor Society and made the Dean’s List from 2013-16.

Aguirre also served as president of the Financial Management Association on campus and founded the Association for Climate Action & Education for Sustainability & Adaptable Resources. In November, the association held the 2017 Climate Change Education Expo, bringing together students, scientists and industry professionals to campus.

After graduation from Cal State LA, Aguirre will move to Delaware to begin a two-year Financial Analyst Development Program with JPMorgan Chase. He plans to become a certified financial analyst.

“It’s a dream come true and I feel like a lot of the work that I have put in through internships, classes, and being proactive, I think all that is starting to pay off,” Aguirre says. “It’s amazing how everything turns out.”

Jillian Beck is a news writer and content producer for the Office of Communications and Public Affairs at Cal State LA.