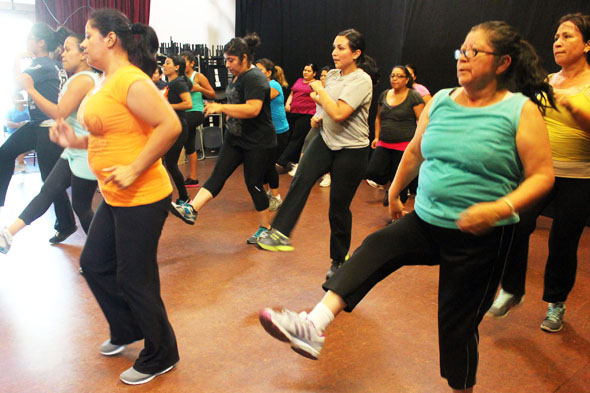 Women kick into gear at the Tuesday night Zumba class at the Boyle Heights Technology Center. Photo by Emily Valdez.

At a jam-packed recreation room at  the Boyle Heights Technology Center,  fun Latin music fills the air, making  you want to move.

All around, people are smiling and  dancing with friends and family. It  looks like a big party. You hope  you’ve  finally found what you have been seeking:  a way to lose weight and have fun  at the same time. Welcome to the world  of Zumba.

Zumba has become a workout craze  over the past few years with studios and  classes popping up across the country.  In Boyle Heights, dozens of classes occur  daily at schools, studios, gyms and  community centers. Perhaps one of the  biggest reasons Zumba has become so  popular here is the Latin music that is  incorporated into the exercise class.

Cecy Lizaola, a Boyle Heights  resident, has been doing Zumba five  mornings a week for a year.

“I like the  music, and apart from that, I also see  the results,” she says.

Lizaola considers herself living proof  of Zumba’s effectiveness for weight loss.  At one point, she weighed 135 pounds.  After 12 months of Zumba classes, she  has lost 17 pounds and says she feels  better than ever.

But weight loss  isn’t  the only draw. Thirty-three-year-old Kat Barrera, who  has been taking a twice-weekly Zumba  class for six weeks at the Boyle Heights  Technology Center, says it’s the dancing  that draws her.

“That’s my favorite thing  in the world,” she says. “Dancing here is  pretty awesome because you do it with a  group of people. It’s pretty motivating.”

While many people come for the  dance, they don’t all realize they’re also  getting an intense cardio.

“A lot of people,  when they think of Zumba, they don’t  necessarily think (they are) are going to  work out,” says  Yéssica Pérez,  a Zumba instructor who was raised in  Boyle Heights. “They think (they) are going  to have a good time.”

A 2012 study by the Department of  Exercise and Sport Science at the University  of Wisconsin-La Crosse found  that the average participant in a Zumba  class burns 9.5 calories a minute. The  actual number of calories burned depends  on a person’s weight and effort.

Each class starts off with warm-ups. Then the fast-paced dances begin. They  each last two to three minutes, and  there is very little time between songs.

“You’re sweating. You’re drenched in  sweat, but it doesn’t feel like you’re  working out”, Pérez says. 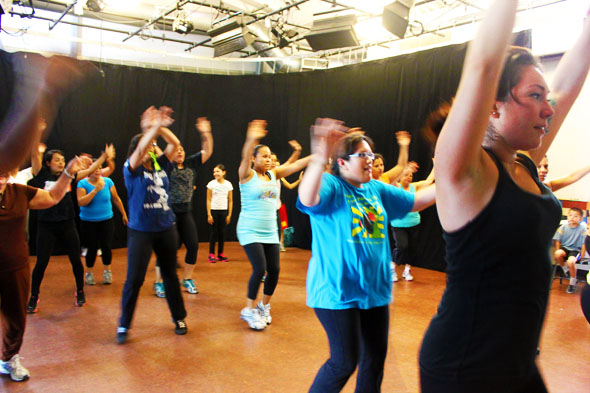 The instructors do the dances in  front of the class and don’t give much  direction, allowing the students to incorporate  their own twists and take  breaks when needed.

“It’s not difficult,” Barrera says. “If you know how to dance, you know  how to do Zumba.”

People say they love the friendly atmosphere and feel like there’s no pressure  during the classes. María Ramos, a  Boyle Heights resident, has been doing  Zumba for eight weeks. She says no one  judges her during the class.

This friendly environment motivates  people to work hard during the class.

Zumba also can be a great way  to meet new people and engage in a  health activity with old friends.

Glenn  López, an assistant clinical professor at  he UCLA Department of Medicine,  noticed in his research with walking  groups in Sun Valley that people were  more likely to exercise with friends.

“Exercise groups create a  social network and an opportunity for  neighbors to meet each other,”  he says.

López believes the social aspect of  the class has contributed to Zumba’s  popularity.

“By coming together  in a group, you have the opportunity  to interact and get out frustrations,”   he says. “Zumba is fun. It’s sexy.”

Dancer and choreographer Alberto Pérez   first created the dance exercise  program in 1986 in Colombia. He  was about to teach one of his aerobics  classes when he realized he had forgotten  his taped music. He improvised,  using the salsa and merengue music he
had on hand.

Zumba took off in the United States  about 10 years ago through the sale of  DVDs that could be used in the home.  Classes started being offered here in  2005. Today, there are countless Zumba  studios, classes, clothing lines and  even video games. Some gyms and  studios offer Zumba spin-offs like  Latin Jam and Body Jam.

Fans of the exercise say they’ve  found something fun and healthy that  they love to do.

Emily Valdez is a Boyle Heights Beat youth reporter and a sophomore at Roosevelt High’s School of Law and Government.