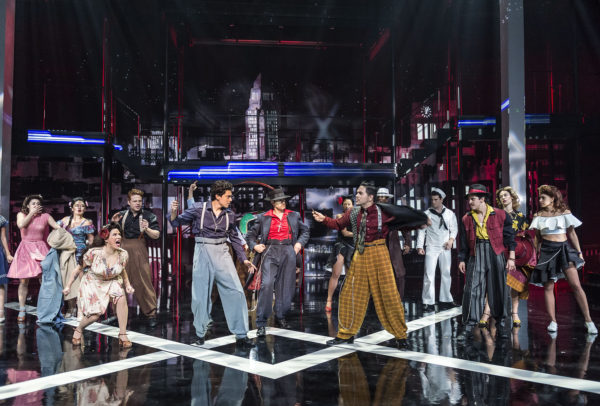 When Zoot Suit first opened at the Mark Taper Forum in 1978, it was seen as a groundbreaking piece of theater. The first time a Chicano-themed play was produced by a major U.S. company, it centered on the inter-generational clashes inside a Mexican-American family and focused on the subjects of racism and intolerance –themes this country seems far from resolving.

Nearly 40 years after its world premiere, Zoot Suit returns this month to the Mark Taper Forum in downtown Los Angeles.

Written and directed  by Luis Valdez, the  play with music has strong ties to Los Angeles’ Eastside Chicano community. It is based on the 1942 Sleepy Lagoon murder of a member of the 38th Street gang in Commerce and the racist Zoot Suit riots of the period, mostly in downtown and East Los Angeles.

The original production of Zoot Suit played for nearly a year in L.A. –first at the Taper and then for an extended run at the Aquarius Theater in Hollywood. It helped launch the career of several of its stars, including Edward James Olmos, the East Los Angeles native who originated the almost mythical character of El Pachuco.  Olmos played the role on Broadway and earned a Tony nomination during Zoot Suit’s brief New York run. The new production, which began previews in late January,  opened at the Taper February 12 and is scheduled to run through March 26.

Daniel Valdez and Rose Portillo –the actors who originated the roles of Henry and Della– now play Henry’s parents as part of a cast of 25 actors, singers and dancers.

Zoot Suit incorporates the music of Lalo Guerrero, a Tucson, Arizona born singer and songwriter known as the Father of Chicano Music who lived and ran a nightclub in East Los Angeles –and wrote many of his biggest hits– during the 1940’s. Some of the songs in the play are Marijuana Boogie and Vamos a bailar. The play also includes songs by Daniel Valdez, the show’s musical director in both the original and current production.

The first Chicano play to open on Broadway, Zoot Suit went on to become a film –directed by Luis Valdez and shot on stage at the Aquarius– and a cultural phenomenon.

This is Zoot Suit’s first ever professional revival in Los Angeles. Valdez directed a 1997 revival at San Diego Repertory and actor Alma Martínez, who appeared in the original production, directed a 2008 student production at Pomona College in Claremont. Martínez also appeared in a 2010 production in Mexico City directed by Valdez –the first time Zoot Suit was presented in Spanish.

The Mark Taper Forum revival was originally slated to run through March 12 but has been extended two weeks due to high volume demand for tickets. Several community discussion and events are planned during the run.

Tickets to “Zoot Suit” are available by calling (213) 628-2772, online at www.CenterTheatreGroup.org or at the Center Theatre Group box office, located at the Ahmanson Theatre. Tickets range from $25 – $99 (ticket prices are subject to change). The Mark Taper Forum is located at the Music Center, 135 N. Grand Avenue in Downtown Los Angeles.

Photo above: Matías Ponce (left), Demián Bichir and Gilbert Saldívar, and the cast of the revival of ‘Zoot Suit.’ Photo by Craig Schwartz.

Editors note: This post was edited on Feb. 13 to reflect that performances have been extended a second time, through March 26.