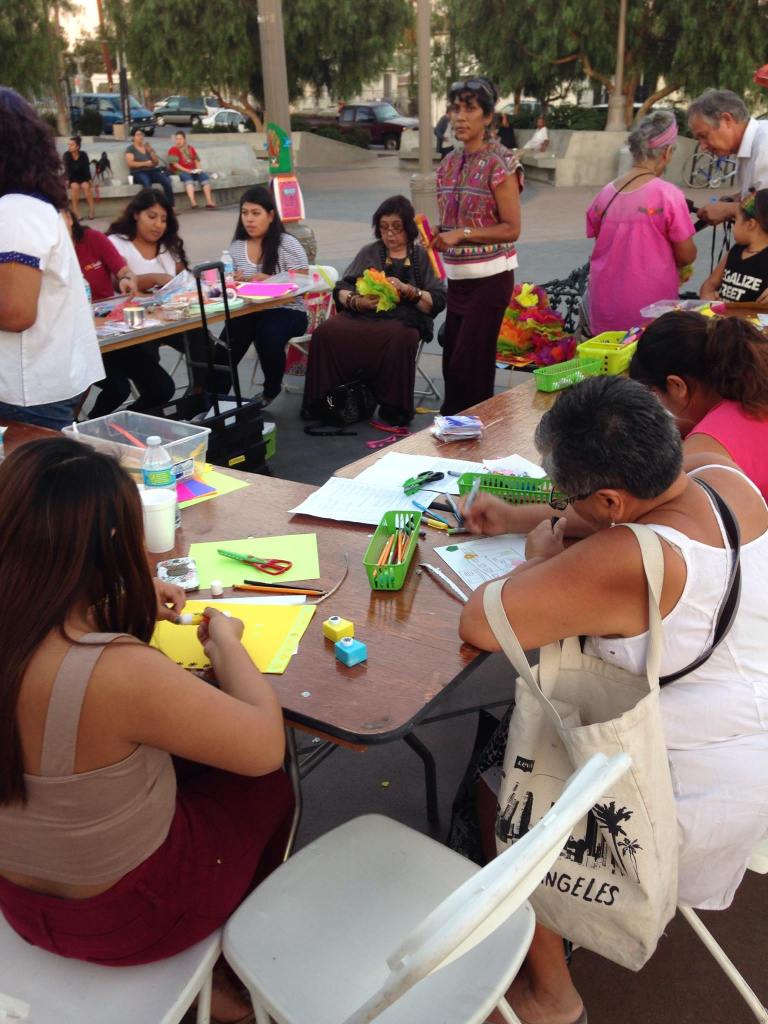 A group of Boyle Heights residents sit around a table set up with sheets of papers, color markers and other art supplies in the middle of Mariachi Plaza. They are asked to interview each other and pick out a quote to illustrate the question: “What does home mean to you?”

A young girl writes “Home is being with my family” and draws pictures of her parents and siblings. Her sheet is strung along with other panels in a “clothesline” hung from the street lights in the plaza, exhibited in an impromptu public gallery for everyone to see.

The workshop was part of “ActivARTE Detouring Displacement: Community Building Con Arte, Cultura y Educación,” an evening of workshops held on Sept. 17 meant to demonstrate how the arts can help prevent and cure social ills. On this day, the workshops were centered on the subject of “development-related displacement” ”“otherwise known as gentrification”“ and its effects on youth in neighborhoods like Boyle Heights.

“We [in Boyle Heights] have the great fortune of having a trajectory of politicized art that speaks to struggle, but also speaks to humanity,” said Alliance for California Traditional Arts (ACTA) Program Manager Quetzal Flores, who helped organize the event. “What we are trying to do is bring those different modes of how artists do this, bring out that process, refine it and hand it over to young people, so that they can take it and do something with it.”

The debut “ActivARTE” event was organized by ACTA with the support and collaboration from various local organizations. (The event was funded by a grant from the California Endowment’s Building Healthy Communities-Boyle Heights (BHC-BH) initiative, which also funds The Boyle Heights Beat).

“ActivARTE” capped a daylong series of activities that coincided with a visit by several Latino recipients of the prestigious MacArthur Foundation Fellowship –artists, writers and scholars banded together as Los MacArturos”“ in which they were invited to interact with local residents, particularly the youth, to focus specifically on the issues of education and displacement. 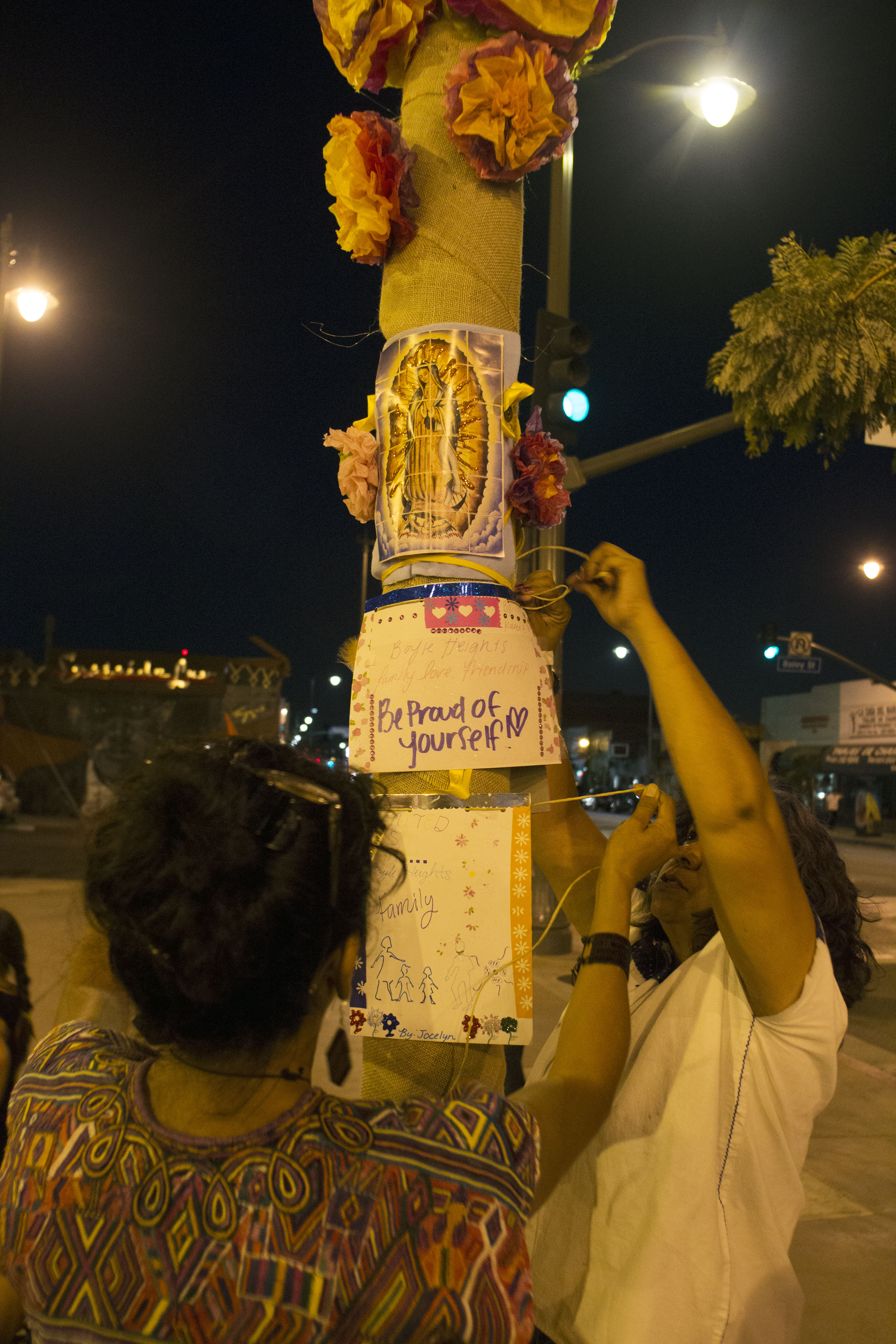 In the morning, the group stopped at CASA 0101 Theater, where they heard from two community leaders focused on helping Boyle Heights youth.

“Our mission here is to nourish the future storytellers and future artists,” said theater founder Josefina López, a playwright with deep roots in Boyle Heights. “And our mission is to develop Latinas.”

Lou Calanche, executive director of Legacy LA, explained her organization is dedicated to youth empowerment in the Ramona Gardens Area. She talked about public policies that encourage the displacement of young people from public housing developments, and how her organization teaches them to look at issues of poverty, oppression and police harassment through a social justice lens.

A portion of the broadcast included commentary from local youth, who stressed how criminalizing policies in schools prevent many of them from graduating from high school and pursue a higher education.

The future is in good hands

The youth of Boyle Heights played a major role throughout the day, particularly at an invitation-only, afternoon town hall held at the historic Boyle Hotel’s community room that focused on displacement and gentrification and taped for future broadcast by Radio BilingÃ¼e. 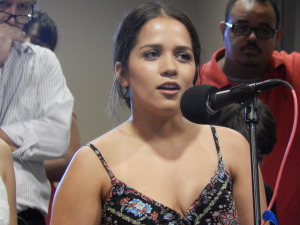 Wyvernwood resident Sara Aceves, 19, spoke of the threat of being pushed out of the housing complex by developers. Photo by Jackie Ramirez

Some of the afternoon’s most compelling testimony came from Wyvernwoood Apartments resident Adriana Carranza and her two daughters Sara Aceves, 19, and Lone Aceves, 16, who spoke of the threat of being pushed out of that housing complex by developers. The 16-year-old nearly brought the audience to tears as she spoke of the beauty of her small community.

San Francisco-based artist Guillermo Gómez Peña, the MacArturo who was to end the day with a free, public performance at Casa 0101, called gentrification “the new chapter of the Conquest of the West,” a theme that was picked up by at least one of the young speakers.

The session, which included testimony from youth associated with Legacy LA, Corazón del Pueblo and other area groups, ended with a poem about displacement by Highland Park resident Karen Anzoategui.

“I want to say that the future is in good hands,” said Amalia Mesa-Bains a San Francisco-based artist and visiting MacArturo. “[The young people] are fuerte, they are spirited. I think that what’s happening here is probably what needs to happen in other communities in the country, that people need to come together to declare what is there and what is worth protecting.”

The power of art

Later, Mesa-Baines worked with East Los Angeles artist and shop owner Ofelia Esparza in the creation of a public altar at Mariachi Plaza, devoted to victims of displacement. At the end of the ActivARTE workshops, the two women dedicated the altar in a ceremony, to ensure the space was treated as a space of devotion and not just decoration.

Visiting artist Benjamín “Pepón” Osorio pointed out that Boyle Heights could become a “model” for other cities facing displacement and gentrification.

“If we do it right, [we can help] other cities, other Latino communities that are going through the same transition, which is my concern,” Osorio said. “How do we shift the economy around, [find] Latinos who access and money and can invest in a way that is culturally safe and culturally protected?”

For organizer Quetzal Flores, who is also a well-known musician and performer, the day was successful in “lifting” the dialogue around the issues of education and displacement, emphasizing the role that artists can play in society.

“The most important part is to understand that artists don’t live in a bubble,” he stressed. “That we are a living, breathing part of the community, and that we are essential to social movement and change.”