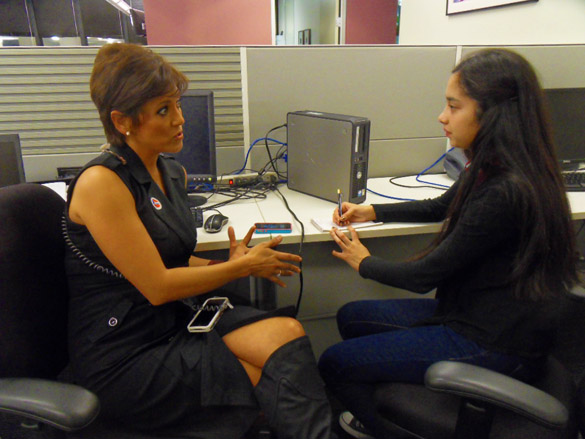 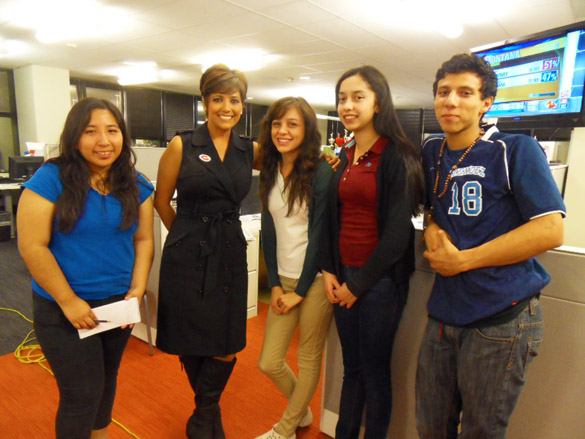 Nine excited Boyle Heights Beat Reporters headed to La Opinión on Election Day. After getting through the traffic and going up the 30 floors on the elevator, the youth reporters were greeted with smiling faces from La Opinión staff. The newsroom was calm aside from the clicking of the keyboards as journalists typed away at their stories, while TVs broadcast the ongoing election results.

Also on the scene was Azucena Gomez, Telemundo news anchor and reporter, and Alex Vasquez, NBC and Telemundo news cameraman. Both Gomez and Vasquez were more than willing to talk to the youth reporters and tell them about their jobs. Vasquez showed the youth reporters his equipment, including his Live U Portable Solutions backpack, which he called the “future of broadcasting.” 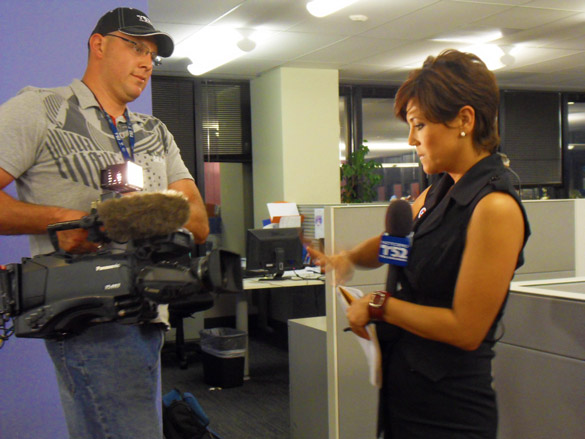 Vasquez and Gomez prepare for a live broadcast. Photo by Elisa Hough.

Gomez also shared what inspired her to become a reporter along with the perks that come with the job. What Gomez likes most about her job is telling stories.

“It’s amazing to tell stories that connect people of so many different races and cultures,” she said.

Gomez mentioned to the reporters that she has always liked being informed and reading about what goes on around the world. She was greatly influenced by her father, who would always read the newspaper.

As Gomez was growing up, she would watch NBC 4 to become informed and at the same time learn English. She came to the United States from Guadalajara at age 13.

“Immediately Channel 4 was always in my head,” she said. “So I said, maybe one day I’ll be working there.”

When the topic of pursuing journalism came up with Boyle Heights Beat youth reporters, Gomez said, “It’s a beautiful career.”

Yazmin interviews Gomez during a break from broadcast. Photo by Elisa Hough.