Lucy Herrera is now an intern through Public Allies at Legacy LA. Photo by Antonio Mejias-Rentas.

“It was hard to explain to them what it was like growing up in the projects,” she says. “People have this perception that everyone who grew up in the projects is gang-related or does drugs. [Despite] this negative connotation, it’s still a community, you know everyone.”

Now a 22-year-old college graduate, Herrera has fulfilled a promise to herself, to come back to Ramona Gardens and work for the community where she was born. And she is doing it at the non-profit Legacy LA,   the very place where she first recognized her leadership potential as a 16-year-old high-school student.

Through an internship funded in part by another non profit, Public Allies, Herrera now leads the very same Youth Leadership Program where she first began, as a teenager, to reconsider the social ills that blighted her community. 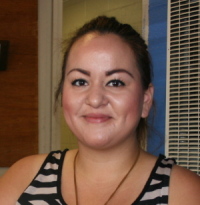 She says she resisted peer pressure to join a gang and opted for staying in high school and getting involved with a group that offered education and empowerment programs for Ramona Gardens youth.

“My dream is that she someday will head Legacy,” says the group’s founder and director, Lou Calanche, who adds that Herrera’s was the first among her peers to understand the need for social justice in her community. “She gets it.”

Being part of Legacy LA’s very first Youth Leadership Program, says Herrera , was a transforming experience. “I identified myself as a leader. I knew that I cared about issues in my community and i knew that I wanted to be educated and go to college.”

At first, Herrera only expected to go to East Los Angeles College or, at best, Cal State LA, but a slogan she heard at Legacy inspired her: “Dream big, possibilities are endless.” She began applying at UCs and out-of-state schools, and was shocked to find she was accepted. She opted for the Riverside campus, where she went right after graduating from Lincoln High School in 2010, because it allowed her to be close to her mom and two younger siblings.

Going away to college not only opened her world to new possibilities but also reaffirmed her desire to return to Ramona Gardens and help others like her pursue a higher education.

“I know that there are a lot of kids at Ramona Gardens that are just like me, so I want to be able to be an advocate for them and show them that college is something they can do.”

With a degree in political science and pre-law, Herrera says she would like to put off going to law school for a few years, and work with Legacy to help bring changes to her beloved community. One way is through the College Club, which offers Ramona Gardens youth help with the difficult application process.

Her biggest advice: “Never forget where you came from. Even if you make it in life, always come back and help others.”