City and county authorities tout the Los Angeles Bioscience Corridor as an avenue of promise for the Eastside, a place where bioscience companies –both established and start-ups, will have room to grow. 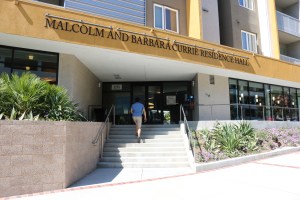 New student housing facilities have recently been completed at USC Health Campus, which some detractors say will contribute to the area’s gentrification.

The corridor runs along Valley Boulevard, the border between Boyle Heights and Lincoln Heights. Anchored on the west by the LA County+USC Medical Center and the USC Health Sciences Campus and on the east by Cal State LA and the U.S. headquarters of pharmaceutical giant Grifols, it’s a commercial and industrial stretch that also runs along City Terrace and other Eastside neighborhoods.

The hope is to bring in hundreds of millions of dollars in development from entities attracted by an ecosystem of “leading-edge, intellectual and commercial activity,” according to the LA Bioscience Hub, the advocacy, marketing and policy arm of the Corridor, run by the city and county.

But not everyone shares the optimistic vision.

Boyle Heights residents living near the corridor are concerned about the effects all this development could have in their neighborhoods. Pamela Agustín, a community activist and leader of Eastside L.E.A.D.S., says some residents are already being priced out of their homes and rental apartments because the neighborhood, which is adjacent to downtown, has become far more attractive to renters and commercial developers and investors.

“Displacement is happening because of these developments,” said Agustín. “It affects our emotional, psychological health [and] our environment.”

At its Health Sciences campus, USC spends millions of federal government dollars for biotech research on conditions as varied as Alzheimer’s disease and obesity. Under its 25-year master plan, the university also is investing several million dollars in modern student housing, a 200-bed hotel that will soon begin construction, and walkways and exercise facilities for nearby Hazard Park in Boyle Heights. 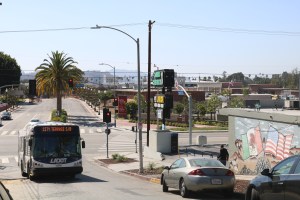 The USC Health Campus as seen from Ramona Gardens, the neighborhood directly to the East which includes the city’s oldest public housing project.

“The main reasons for USC to be investing in this area are health and jobs,” said USC Provost Michael Quick in an email to Boyle Heights Beat.

[Editor’s Note: Boyle Heights Beat is a project of the Center for Health Journalism at USC’s Annenberg School of Journalism.]

Eastside LEADS is one of several local groups that banded together in 2017 in a “Health Innovation Partnership” announced by County Supervisor Hilda Solís as an effort to engage community residents affected by all these developments.

“It is important we make sure everyone gets a seat at the table,” said Solis. The partnership, she added, “puts the community at the forefront and allows them to contribute to the overall conversation and take ownership of their neighborhoods. This helps us build an authentic community engagement process that will set growth on the right track.” 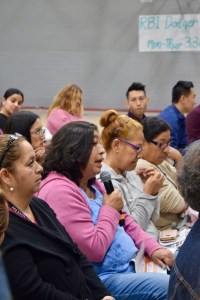 USC is not a part of the partnership. In response to community concerns, USC’s Office of Civic Engagement has formed its own East Area Community Collaborative, holding community meetings in and around the Health Sciences Campus to speak about the proposed biotech park and inviting community members to voice their opinions.

USC Provost Michael Quick said in an email to Boyle Heights Beat that he is “dedicated to being the great research university for the public good — that means being a partner with our communities to solve major problems.”

Quick said the project could create up to 3,000 new construction and almost 4,000 new permanent jobs –some of which would be held by local residents. The provost quoted a study that found that for every high-tech job created, four more are added in collateral fields like marketing, accounting or sales. “A project of this magnitude will expand job opportunities across the entirety of the professional administrative spectrum,” Quick said.

But some residents fear that most of the permanent high-tech jobs will go to highly trained people from elsewhere, not from underserved neighborhoods where many teens struggle to finish high school. They also fear that development will make housing here even more scarce and expensive. 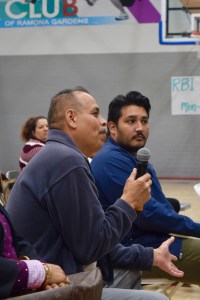 “If a biotech corridor is developed without community input, without anti-displacement policies, and without an aim for community benefit, the impacts will not be positive,” said Agustín. Historically, development plans of this scale have led to mass displacement.”

In presentations to area residents, USC Vice President of Civic Engagement Earl Paysinger said USC’s proposal for an Eastside biotech park would ideally take advantage of two lots owned by the county adjacent to the Health Sciences Campus, where it stores public works equipment and parks its trucks.

In an interview with Boyle Heights Beat, Paysinger said the university is still in talks with the county to acquire those two lots, but that a definite site or size of an Eastside biotech park has yet to be determined.

When asked about opposition by groups like Eastside L.E.A.D.S., Paysinger said the university has been involved in “a lot of healthy dialogue” with members of the community about “maintaining the integrity” of the neighborhoods surrounding the campus. He said USC is sensitive to parking, noise and other concerns associated with development.

One of those neighboring communities is Ramona Gardens, just east of the Health Sciences Campus. It includes one of the city’s oldest and largest public housing developments.

At a recent community meeting at the Ramona Gardens’ public housing complex hosted by Boyle Heights Beat, residents expressed their concern about the ongoing expansion of the USC Health Sciences Campus and the proposed biotech park.

But some residents also said that residents could benefit from new educational opportunities that could come from an agreement with developers of the biotech park.

“It will be something good, if it’s for educational and technological development,”

said Ramona Gardens resident Nathan Ramos. “But at the same time, we should not be taken advantage of. We don’t want to be displaced. To the contrary, we want to be helped.”

That’s why activism by groups like Eastside L.E.A.D.S is important, says Agustín.

“Our communities have been historically disinvested, historically segregated,” she said. “We’ve been fighting these injustices. We’ll continue to do so as a unified community.”