With its accessibility to Downtown and the Arts District, the housing market in Boyle Heights is undoubtedly booming. Interest in local housing stock, according to various reports, is pushing the median price of houses sold in the neighborhood to new highs. 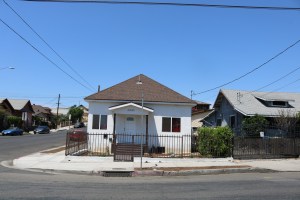 According to the paper, the 1913 home was recently remodeled to bring it into the 21st century. Its features include two driveways, a landscaped front yard and an updated kitchen.

The Times cited CoreLogic numbers that show that, based on eight sales, the median sales price for single-family homes in May in the 90023 zip code was $411,000 –up 12% over the last year.

Looking at Boyle Heights as a whole, real estate company Trulia says home prices in the neighborhood have been on a steady rise for the past five years.

The type of homes that have seen the highest price increases in the neighborhood –according to Trulia–  are the one-bedroom and four-bedroom homes.

Local groups complain that the increase in sales prices is directly related to the ongoing gentrification of Boyle Heights.