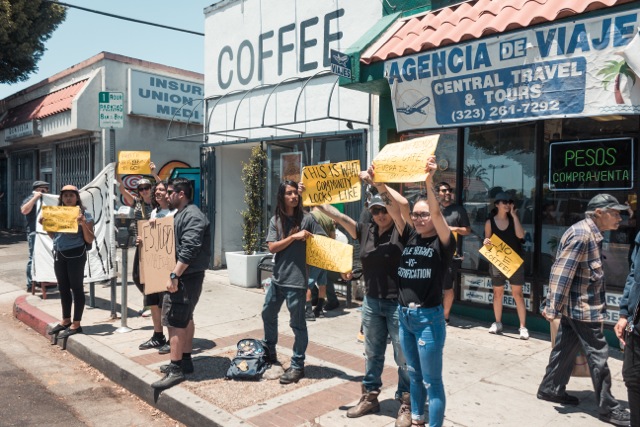 The owners of Weird Wave Coffee are saying that protests by community activists, who have labeled them as gentrifiers, have been good for their business. Several media outlets have reported that the community appears to be split over the artisan coffee shop, with the Los Angeles Times reporting that Weird Wave saw its busiest day Saturday and that the shop was again vandalized this weekend, after a similar incident was reported last week.

Police tell the Times that they do not know who vandalized Weird Wave Coffee on either occasion. There were no organized protests this weekend by groups that have called for a boycott of the business.

The coffee shop on Cesar Chavez Avenue has been the target of anti-gentrification activists since it opened in mid June. Protesters say that specialty coffee shops make Boyle Heights more attractive to people with higher income, which in turn pushes rent and property prices up and leads to the displacement of the neighborhood’s poorest residents. The shop owners say they are partly owned by a Latino businessman and that they are helping the local economy, by purchasing from local vendors.

Weird Wave co-owner Jackson Defa told the Times that the recent media coverage of the shop is partly the reason why over 150 people came in on Saturday. The Times spoke with several customers, some of which said they understand the concerns about gentrification but that violence and vandalism were uncalled for. Others said that the café is better than a vacant lot and gives Boyle Heights residents a place to eat at rather than having to go somewhere like Silver Lake or Echo Park for a similar service.

Several customers of the coffee shop were also included in a opinion piece Saturday by Los Angeles Times columnist Steve Lopez titled “Protesting a coffee house over gentrification fears is silly — and misses the point of L.A.” The columnist called protesters –which include members of the collectives Defend Boyle Heights and B.H.A.A.A.D.–  “a bunch of hypocrites and cowards” and said “the protest has a couple of ridiculous aspects to it” because of the Latino owner and because a Starbucks in the neighborhood has not been met with any protests despite being a large, outside corporation.

Displacement caused by gentrification is real, López wrote, “but you can’t easily reverse the phenomenon, or have any real impact with a race-based rant against a small independent coffee shop that moves into a vacant storefront and is embraced — as far as I could tell — by merchants and neighbors.”

Neither story in the Times this weekend quoted an activist or a person involved in the protests.

On Saturday, the paper also published a number of letters from readers under the headline “‘White coffee’ protesters forget that Boyle Heights isn’t a Latino-only neighborhood” – all of them from people who live outside of the neighborhood and are opposed to the protests.