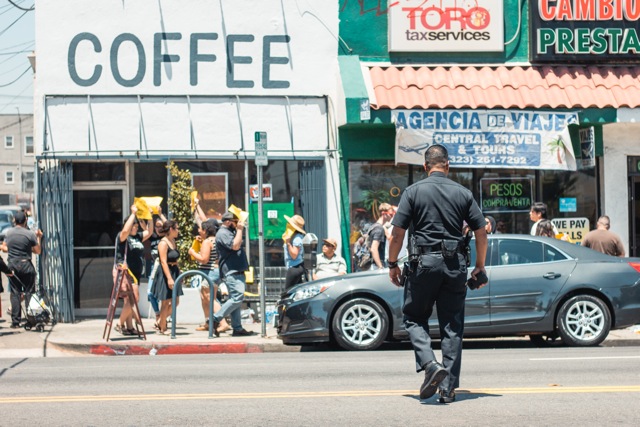 Police are investigating the early Wednesday vandalization of a new coffee shop on César Chávez Avenue that has been the target of protests by anti-gentrification activists in Boyle Heights.

The Los Angeles Times reported that surveillance video at Weird Wave Coffee showed a person wearing a black mask apparently using a slingshot  to shoot an object at the shop’s logo that cracked its glass door.

Times photographer Irfan Khan posted a video on his Twitter account that shows John Schwarz, one of the coffee shop’s three co-owners, picking up the shattered glass from the sidewalk.

Since its opening in mid June, Weird Wave has been the target of protests by local activists, including members of Defend Boyle Heights –a coalition of five local groups and the Boyle Heights Alliance Against Artwashing and Displacement or B.H.A.A.A.D.

Protesters say that specialty coffee shops make the neighborhood more attractive to people with higher income, which in turn pushes rent and property prices up and leads to the displacement of the neighborhood’s poorest residents.

Activists have also protested art galleries in Boyle Heights’ warehouse districts. Last year, one of the galleries was vandalized with the spray-painted message “F… White Art” –which police investigated as a hate crime– but the activists groups denied any involvement.

The owners of Weird Wave Coffee told the Times they didn’t know if Wednesday’s vandalism was related to the protests.