Dozens of area residents brought flowers and candles and placed them in an altar set up for the young victims, identified by family members as seven-year-old Marco Antonio Hernández and his nine-year-old brother José Luis Hernández.

A total of seven people were injured in the crash that happened at about 7:30 p.m. on the corner of Whittier Boulevard and Indiana –on the border between Boyle Heights and East Los Angeles.

The cause of the crash is being investigated by the Los Angeles Police Department.

According to published reports, Sheriff’s deputies were responding to a shots fired call in East Los Angeles, about a mile away from the devastating crash. The Sheriff’s SUV was Southbound on Indiana Street when it approached Whittier Boulevard and hit another vehicle. An LAPD spokesperson told the Los Angeles Times that the force of the crash caused the SUV to veer onto the sidewalk in front of a Wells Fargo Bank on the southeast corner, where it hit the mother and two children.

The car hit by the Sheriff’s SUV hit a third vehicle, which hit and injured two other pedestrians in the busy crosswalk.

The deputies involved in the crash have not been identified. Several sources told the Times that the driver of the SUV was a deputy trainee riding with her training officer.

The LAPD spokesperson said it was unclear how fast the Sheriff’s vehicle was driving or if the vehicle’s sirens were blaring.

A witness has said that the Sheriff’s vehicle did not turn on its emergency lights until it approached a red light at the intersection, and that it never had its sirens on. A security video from a nearby liquor store obtained by the Los Angeles Times shows that the vehicle’s emergency lights were on as it hit the pedestrians, but because the video has no audio, it’s unclear if the sirens were on.

This video is brief and brutal. https://t.co/a1AZaBoYIs

Among attendees at Saturday’s vigil were students of the 32nd Street School/USC Performing Arts Magnet, where the older of the two brothers attended school. 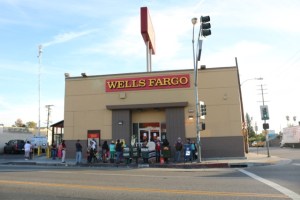 Prayer services on Saturday were led by Father Park Sandoval, a priest at nearby Resurrection Catholic Church in Boyle Heights. The vigil was organized by Centro CSO: Community Service Organization, a Boyle Heights civil rights group that has worked with families who have been victims of police involved shootings.

“The Boyle Heights community has suffered several tragic incidents recently and has united to show solidarity with the family and to ask for transparency in the investigation and accountability for the LA County [Sheriff’s deputies] involved in this horrible incident,” read a statement released by Carlos Montes, a member and organizer with CSO.

On Sunday, South Los Angeles neighbors of the two boys’ family held a fundraiser for their funeral.

Boyle Heights. Do your thing. pic.twitter.com/igRIiUzET6

Friday’s tragic crash occurred less than a week after an 11-year-old girl was killed when a speeding car crashed onto a vehicle parked in front of a taco stand in Boyle Heights, about a mile West on Whittier Boulevard.

The 21-year-old driver of that vehicle was arrested and charged with vehicular manslaughter.