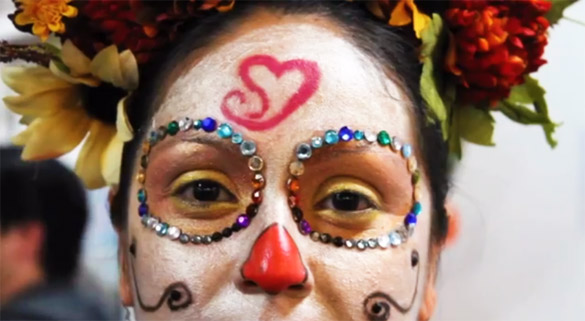 The 39th annual Día de los Muertos celebration hosted by Self Help Graphics  brought many Boyle Heights residents out. Guests were welcomed with a photo booth, food vendors and musical bands performing on stage throughout the night. Inside the nonprofit, a gallery of paintings, photographs and altars curated by Ofelia Esparza filled the space.

Preparation for the event, including making paper flowers and  papier-mÃ¢ché skulls, was done in weekend workshops throughout October. Over a thousand volunteers attended the workshops, and over 100 during the last week, said William Acedo, who led the workshops for his seventh year in a row.

For the 47-year-old artist, the process is the event.

“You’re not being judged on the quality of the work,” he said. “You’re being judged on how you pour your heart into it, and how you’ve taken to remember and honor that person. With that formula, magic happens.”

Explore some of the magic from the night and some remarkable face painting in this video: