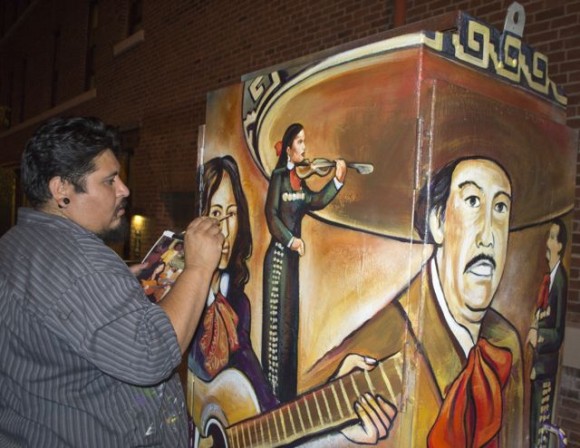 The last of nine newly-painted murals decorating utility boxes along East First Street in Boyle Heights is expected to be completed by next week.

The artwork is part of the Eastside Access Project, a $12 million plan to improve safety and access for bicyclists and pedestrians along the Metro Gold Line in Boyle Heights and East L.A., facilitated by Councilman Jose Huizar, Metro and City departments.

Other improvements including, streetlights, bike racks, benches and trees are already underway.

Councilman Huizar commissioned the mural project for boxes extending between Soto Street and the 101 freeway, while Boyle Heights muralist Raul Gonzalez helped coordinate the effort by assembling the team of artists.

Gonzalez, who’s been painting since 1988, says there’s an underlying message about youth in public art.

“When you look at public art or graffiti, you see that the youth is angry. They don’t have vehicles for expression. If we could find a way to get money involved where painting could improve the area”¦because kids follow by example,” said Gonzalez.

His own utility box mural pays homage to his own musical family history as well as the mariachis of Boyle Heights, and sits right off the Gold Line’s Mariachi Plaza station.

According to Gonzalez, all nine murals characterize a different part of the city that is representative of Boyle Heights as a whole.

Another muralist, Fabian Debora, depicts “La Abuelita of Boyle Heights” off Bailey Street with a stern look surrounded by hummingbirds and flowers.

While some artists paint messages of peace and love, others chose to pay tribute with a political message.

Blosm’s message takes on a global perspective, advocating for historical knowledge as Mayan figures sit in the foreground.

The murals come less than three months after a ban 11-year ban on murals was lifted. Backed by Huizar, the new mural ordinance identifies murals as something other than signs, and allows for art on most private property.

“It’s important that we show our support for art on public property,” Councilmember Huizar said in a statement. “I am hoping this will spur a Citywide movement to promote art and give our talented local artists an opportunity to show the world the amazing artistry that we have here in the City of Los Angeles.”