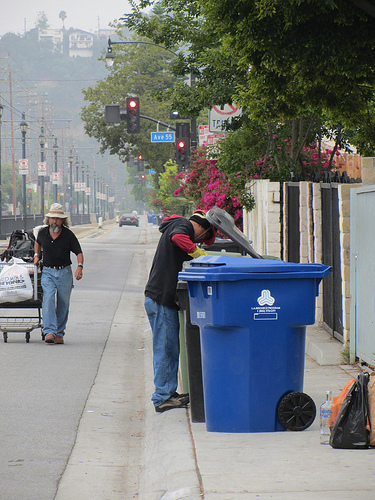 “I don’t hold it against them,” Susy tells me as she exposes the gash on the back of her head. Her short sandy white blond hair is peppered with the little clinging sculptures of dry blood.

Susy tells me she has been a victim of a hate crime. Two Mexican gang members ran over her cart last week as she collected cans and glass from the neighbors trashcans. She was thrown across the sidewalk and rushed to a hospital.

It is a common sight on this East Los Angeles block. Trash pickers, or dumpster divers, as some are called, make their rounds on Thursday nights and Friday mornings. Latino immigrant seniors, mothers, fathers and sometimes children, all pick their way through various trashcans looking for gold: cans, bottles and plastics.

Susy is no different except for one thing; she is white. And in East Los Angeles, whose residents lean towards a predominately low income Latino immigrant community, a white woman picking through the trash exemplifies the clashing of social, economical, poverty and class status.

“I collect my cans to pay my rent” she jubilantly shares. “I don’t want to cause no trouble for anyone, and I know that God will protect me.”

Until recently, Susy was homeless. She now rents a $200 bedroom up the street from the local boys and girls club. It’s the beginning of the month, rent is due, and she’s going to work all night.

By Thursday afternoon when I offered her my recyclables, she had already collected about $100 worth of cans and plastics.

She has two loyal friends, Duke and Daisy, a pair of Chihuahuas that sleep in her cart and protect her goods. She’s named them after her favorite show, “The Dukes of Hazard.”

“I found Daisy stuffed in a plastic bag just up the street,” she recalls while petting the head of her white-tan companion.

“She looked like a tiny little rat, but why anyone would do that to a poor defenseless creature is beyond me,” she whispers softly. She rescued Duke from a shelter and proudly tells me that both are spayed and neutered.

I ask her about the accident and what its like to be homeless, a woman, and white in this part of the city.

She looks over the horizon of the street gleaming from the afternoon sun and tells me she could tell me stories. Her eyes swell up with tears and she fights back memories of rape, abuse, hunger and fear.

“It’s hard to be strong sometimes,” she says.

“I dress like this, like a tom boy, so that I can blend in at night, but it hasn’t always worked.”

She tells me gang members have told her she needs to leave East L.A. That “their” people need the cans more than she does. They tell her that she doesn’t belong here.

“Some have yelled at me, ‘This is OUR country!’ but I don’t get into those politics,” she says.

“I don’t like bothering anyone and I’m just happy to be alive and that my dogs are OK. I protect them more than myself sometimes.”

Susy is excited to have her own place. She says a nice lady gave her a bed and she has plenty of dog food for Daisy and Duke.

She says many of the neighbors saw the accident and rushed to defend her.

“So many people have told me, ‘Susy, we’re gonna look out for you tonight, you’re not alone and we’re not going to let anything happen to you,'” she says.

She says the police have told her they have caught the two individuals who ran her over and they will be facing hit and run charges, attempted manslaughter and possible deportation.

Her eyes begin to swell with tears again and she clutches a cross that a 90 year old woman up the street gave her.

“God will protect me as he always has,” she says, “I can’t judge people with hate in their hearts, that’s not up to me.”

After her accident, Susy laid on a hospital bed at East Los Angeles Doctors Hospital without consciousness. A doctor who recognized her told police to bring her dogs to her side. With small licks to her face, Daisy and Duke woke the sleeping Susy.

It’s a boiling summer afternoon, there are no trees for shade, only the solace of the familiarly hot urban asphalt as Susy tells me her story. With tears in her eyes, Susy holds both dogs close to her chest and whispers, “They brought me back…they brought me back.”

While Susy now has a place to call her own and rent to pay, she was once one of thousands of homeless women in Los Angeles.

Home to Hollywood glamour and celebrities, the City of Angeles is also known as the homeless capital of the country, a bewildering juxtaposition for a 1st-world nation. A 2009 homeless count conducted by the Los Angeles Homeless Service Authority concludes that there are approximately 43,000 homeless people on any given night in Los Angeles — a 38% decrease when compared to a 2007 study. That’s not to say however, that gentrification to the Skid Row and Downtown areas haven’t pushed out many homeless residents to other cities.

“I don’t mind this work.” Susy affirms as she makes space in her cart for the cans and bottles I have given her, along with an old microwave for her new place and a dusty tea set I am embarrassed to offer her.

She gives me a big hug, offers me a blessing and lets me pet her two best friends.

She laughs at how they seem to like me and goes back to arranging her cart.

“God willing, next week, when I turn 56, I’ll have enough for some cake for Daisy, Duke and me.”