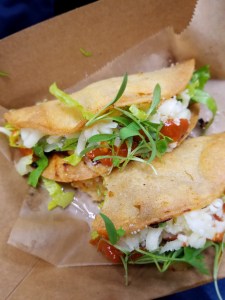 I discovered Tolosa via Instagram. I saw a photo of taquitos dripped in a green sauce and topped off with some white cheese, and clicked on their profile. Fast forward to Sept. 20th. A couple of my friends and I signed up for a “Tacos y Arte class”.

The art part of the class was hosted by artist Andrea Ramírez, who goes by Mextica and started this event with Chef Steve Tolosa in August. The class is similar to a “Paint and Wine” event, with a twist. Chef Tolosa serves up three courses of his delicious menu and unlimited aguas frescas.

Our first course was a pair of hard-shell potato tacos. I don’t know what he put in that potato, but it was cooked perfectly: a slight outer crisp and super soft in the middle. The next course was some traditional carne asada tacos. The tortillas tasted and felt handmade and the salsa verde I had them with was perfection, a perfect blend of spices and taste. The third course was a couple of flautas, fried to perfection with shredded beef and served with a green sauce. They weren’t your ordinary skinny, empty shell of a flauta. It was full, juicy and very flavorful. 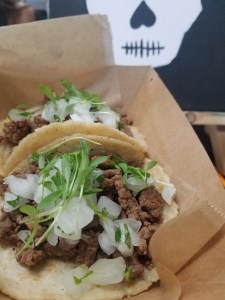 The event is also BYOB, which we did. It was such a good time. An intimate setting with about 30 people and music playing in the background.

Andrea was super patient with all of us and let our imagination run wild. She set up and started with her instruction. I needed help, of course, since I am not an artist per se. This was my first time trying to paint a calaca, but in honor of the upcoming Dia de los Muertos, I have to say, for being a rookie it came out pretty good. 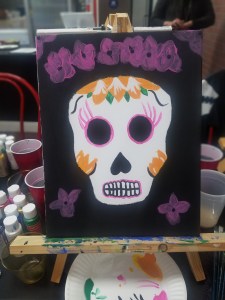 Tolosa opened in the summer of 2018, the restaurant is nice and cozy and they don’t serve alcohol but it is BYOB. Their menu consists of mexican food with a slight twist. The menu includes a Menudo Dip, a Burger Torta and Celia’s rice.

Tolosa and Mextica are hosting their next event this Thursday, Oct. 25 and will be posting the information on Tolosa’s and Mextica’s instagram.