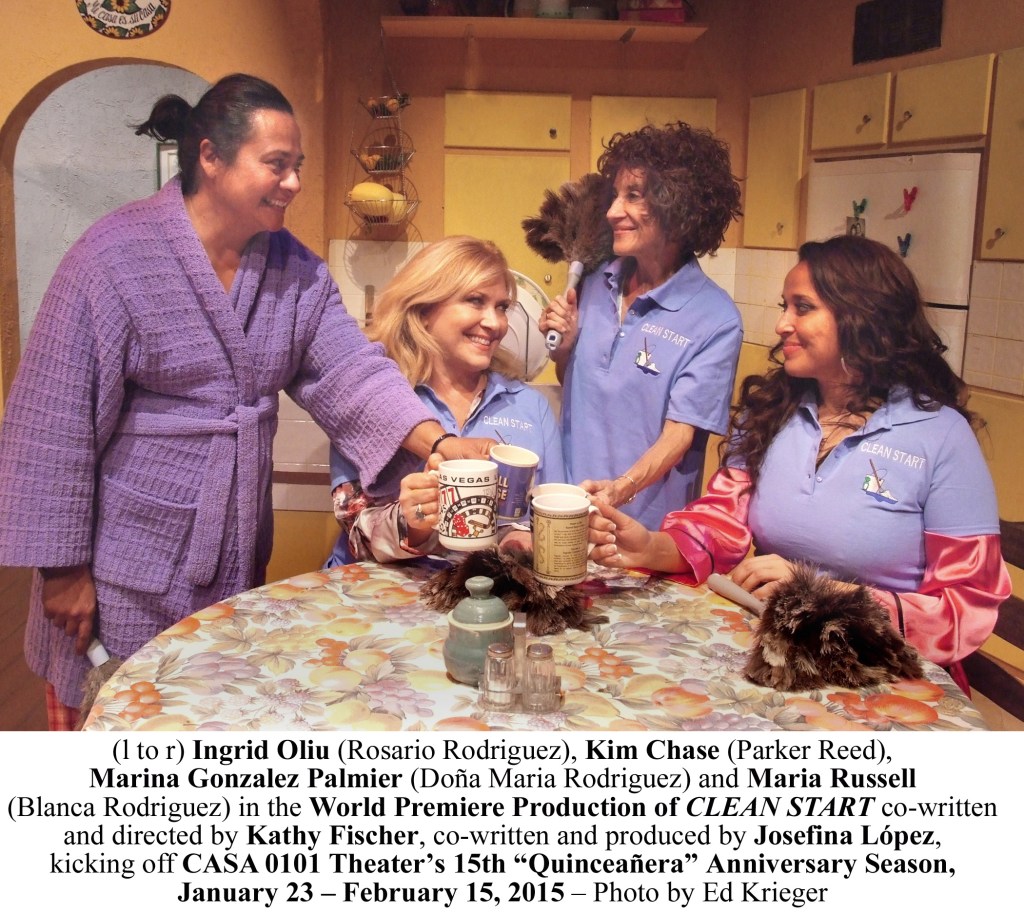 I wanted to enjoy two things about the comedy “Clean Start,” directed by first-time Kathy Fischer: its potentially-intelligent humor and possibly a unique look at overcoming differences.

The play scratched the surface of those expectations leaving me wanting more.

The premise is simple: Beverly Hills socialite Parker Reed (Kim Chase) loses everything, forcing her to move in with her maid, Rosario Rodriguez (Ingrid Oliu), her spoiled sister, and grouchy mother.
Presented at Casa 0101, my first impressions were nostalgic due to the set design, which featured a Last Supper painting and a stray laundry basket in the living room. “Clean Start” nails its visual representation of an East LA home.

As a comedy, some of the jokes and moments were funny. My favorite scene features Vladimir (Robert Jekabson) bursting on stage in boxers and a tool belt becoming the oh-so-tempting forbidden fruit to sinful Blanca. I heard someone in the audience catcall and I know I blushed, which was a lot of fun to experience. But the humor seemed to experience turbulence from there on.

While understanding the production isn’t to be taken seriously, the depiction of being Mexican didn’t seem to resonate well because it seemed to mirror stereotypes. Rosario, the hard-working, uncomplaining, generous to a fault housemaid, unwittingly embodies an outdated view that Mexicans work for little pay and won’t stand up for themselves.

The stereotyping doesn’t end there. Reed doesn’t seem to be more than rich, dumb and blonde. That has been done one too many times. This made the play difficult to have fun and laugh with.

This leads me to a joke that fell flat for good reason. The ever-optimistic Rosario comes upon new maid work and convinces her unwilling family to help. Rosario asks them how they feel. Her mother, Maria, (Marina Palmier) deadpans, “Like a stereotype.”

No one laughed. It was an uncomfortable yet telling moment. If the characters are aware that they’re embodying stereotypes, then what’s stopping the audience?

I hope the intention of such characters is satire. If so, “Clean Start” misunderstands the difference between a satire of stereotype and a stereotypical satire, becoming the latter.

Another issue is only four actors of five got substantial stage time, excluding Jekabson as Vladimir.
Jekabson gave a funny performance but he was featured so little I practically memorized his lines. Wondering if he was ever coming back left me disappointed that I didn’t get to know him. The other actors performed their roles well. Regretfully, the writing and direction just didn’t allow them to open up.

The core issue with “Clean Start” is in its effort to get laughs, it relies too heavily upon one-liners and cardboard characters, forgetting to add human depth. This made the characters and story half-baked, as they “changed” predictably, causing the sparse attempts to teach about family and acceptance underwhelming.

If the play were allowed to breathe, it might have blossomed more naturally but it just didn’t meet the mark. With a few good moments and good visual design, it’s a shame that “Clean Start” doesn’t go the extra mile to tell both a humorous yet thoughtful story. The play is amusing enough to keep you focused for a bit but lacks the required depth to be remembered beyond the theater’s exit.