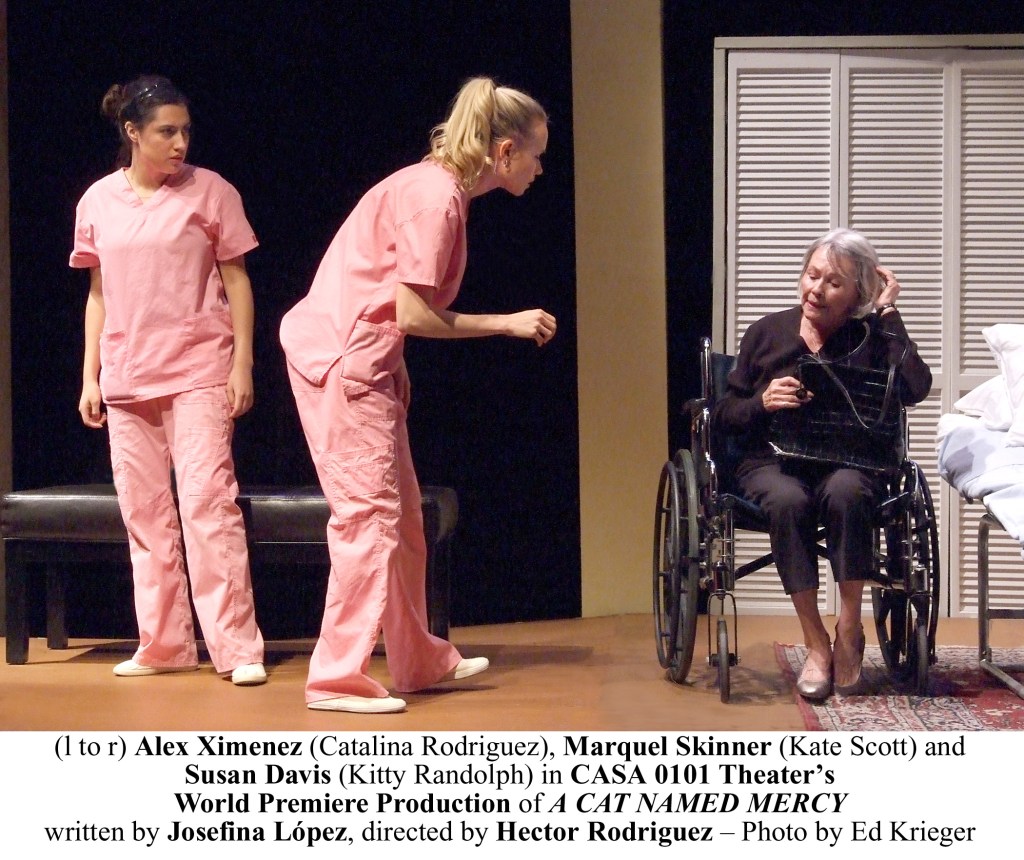 The dark comedy centers on a young nurse, Catalina Rodriguez, played by Alex Ximenez, who cares for her blind and diabetic mother. When her hours at the nursing home are cut, she loses her health insurance. Almost immediately, she discovers she has a cancerous tumor, and no way to get treatment. With the help of a white cat she names “Mercy,” Catalina is guided to help her patients who hold the key to her salvation.

Supported by a grant from The California Endowment, the play is written to address healthcare, The Affordable Care Act and the people who still remain uninsured. Lopez and lead actress Alex Ximenez recently made appearances on CNN Latino and Telemundo to discuss the play””a very current topic with the Obamacare registration deadline approaching next month.

The play is loosely based on Lopez’s own experience. In 2011 she was denied health insurance after being diagnosed with Stage 1 cervical cancer. Lopez recalls that period wavering from going out of her way to take care of people, to suddenly wondering who would take care of her”” which is exactly where Lopez drops Catalina.

Lack of healthcare is the backdrop for all of Catalina’s struggles, but the play tries to explore many themes in a short amount of time, despite it running two and half hours. From her mother’s past guilt, the fear or acceptance of death, and white supremacy, the play would feel more connected by focusing on the big picture.

With the help of an incredible veteran cast, who often kept the momentum going in times when Ximenez’s performance was a bit stiff, the play still tugs at the heart.

Introduced in a strong and emotionally consuming way, the play gets muddled with far-fetched twists and soap-opera choices, and closes with to an almost happily ever after ending. Nonetheless, “A Cat Named Mercy” is well rounded with laughs, distress and our own dilemmas.