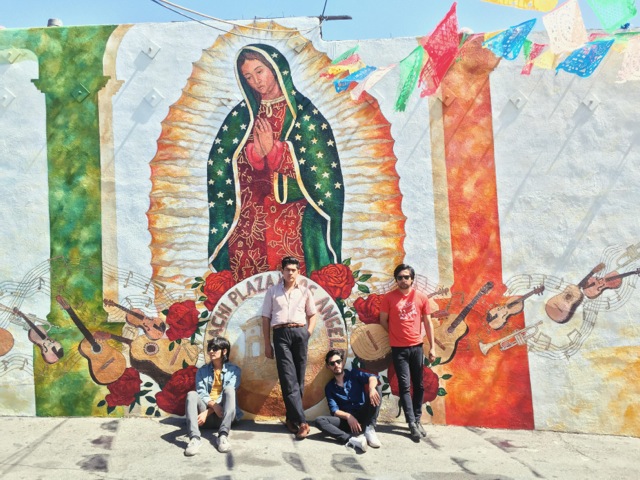 Even before the band started to play, the lead singer told the crowd they were from Boyle Heights, evoking a roar of cheers. The Tracks, a young, up-and-coming Indie rock band, is influenced by and proud of its mariachi and Boyle Heights roots.

“You don’t really hear music like ours, our interpretation of what rock should be like. There ain’t enough cats doing that,” says lead vocalist and guitarist Venancio Bermúdez while discussing the passion behind the band’s first song, “Go Out Tonight,” on its debut album. The Tracks lead singer Venancio Bermúdez during a performance at The Echoplex in February. Photo by Ernesto Orozco.

As a Latino band playing in the largely white Indie rock scene, The Tracks have an opportunity to shake things up. Bermúdez, whose family has a mariachi background, embraces his cultural heritage, while being unafraid to create music not typically performed by Latinos. The Tracks have chosen their name to represent a forgotten aspect of the East Side: the abandoned railroad tracks.

“The fact that we’re brown and were playing this type of rock, which is predominantly played by people who are not brown – I’m proud to represent,” he says.

The original band consisted of Bermúdez and bassist Felipe Contreras, both 25, who met in middle school, and drummer Jaime Conde, 24, whom they met at Theodore Roosevelt High School. In 2015, 22-year old Jesiel Higuera joined them.

Today, the band plays at backyard shows and popular independent music venues such as The Echoplex in Echo Park. Newly signed, the band plans to release its first extended play record (EP) in the fall under Echo Park Records.

“There’s something about their music, their collective vibe and their personas that make you feel assured in their potential and future. They will undoubtedly be one of the next big bands to break from L.A., and I’m really excited to see that unfold,” says Jeanette Díaz, a music journalist at Highlark.com, an online lifestyle and culture magazine.

Alexis Rivera, The Tracks’ band manager, says, “I feel like with mariachi music, there’s a sense of passion and performance, and I think you get that when watching them live.”

Bermúdez, who is tall and well-dressed, sports a pompadour reminiscent of a 60s rocker. He dresses in collared, tucked-in shirts and sharp slacks and manages to look both contemporary and like a hipster from an earlier era. He doesn’t look like a typical rock star, or someone from the neighborhood. He says even locals mistakenly call him an outsider. Boyle Heights band The Tracks at the 1st Street Pool Hall. Photo courtesy of The Tracks.

Bermúdez says performing is a way to positively channel his passion and aggression. The Tracks has become a medium to express his creative freedom and connect with his roots.

His musical career didn’t come easily. He says his struggles help shape his music.  When he was three, his father went to prison.  It was not his father’s first offense, and Bermúdez spent most of his childhood without him. He struggled in school, and, after acting out, was put in special education classes. At 12, Bermúdez met his father again when he was released from prison.

“He was a changed man after he got out of prison, so he wanted me to learn how to play guitar,” says Bermúdez.

Bermúdez’s father came from a family of mariachi musicians. “He would take me up with his old buddies that he would play mariachi with and gave me his old classical guitar, but I wanted to play rock and roll,” says Bermúdez.

This was the start to Bermúdez’s musical career. He played at church and also taught himself to sing. At Roosevelt High School, he began playing what he describes as “bluesy kinda rockabilly psychedelic music” and says that’s when he found his voice.

When Bermúdez was still in high school, his father died from cancer, forcing Bermúdez to take a job at a tortilla factory to help support the family. He says he worked 16 hours a day in terribly unpleasant conditions. He got nosebleeds from breathing in masa flour, and coworkers picked on him.

“I think I was given that job for a reason,” says Bermúdez, “If it wasn’t for that job, I wouldn’t write music how I do. A lot of the lyrics I write are influenced by my struggle growing up.”

Photo above courtesy of The Tracks.

Diego Flores is a Senior at Óscar de la Hoya Ánimo Charter High School. His hobbies include skateboarding, playing the drums and going to backyard punk shows. He hopes to attend a private four-year university away from home.