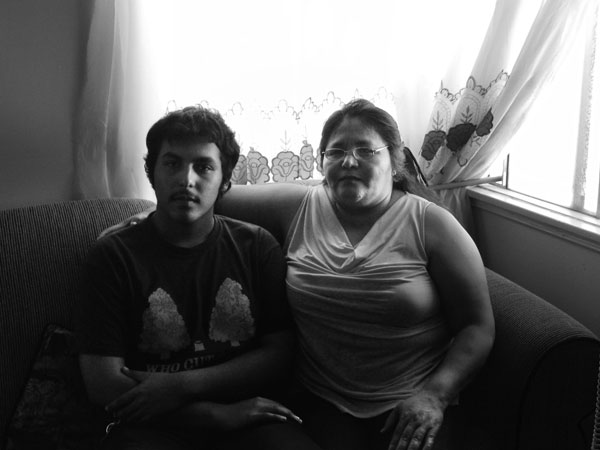 Boyle Heights Beat interviewed a mother and son who experienced domestic violence — Galya Gonzales and Angel Toscano. In these stories, each shares a unique perspective on the impact on their lives.

When a child is rebellious, aggressive, unhappy, or isolated, it is often characterized as a behavior problem. But the child may actually be suffering from an emotional wound and trying to cure his pain.

Domestic violence ruins relationships and can end lives. It can also destroy the lives of children who witness the abuse of a parent. Children who live in homes with domestic violence also often become victims of sexual and verbal abuse themselves. Some also suffer from neglect, become aggressive, experience depression, or abuse loved ones later in life, experts say.

“The children are the number one victims,” said Sonia Rivera, director of sexual assault and emergency services at East Los Angeles Women’s Center. “They are highly affected. The kids become traumatized and become scarred the rest of their lives.”

Angel Toscano, now 17, remembers his family life as a child as one filled with constant yelling and screaming. His mother said he witnessed much more. She said that she will never forget the day Toscano’s father slapped him in the face so hard he ended up under a bed. At the time, he was three years old.

Toscano says he does not remember any of the abuse. But early in his childhood, he was rebellious and was often in trouble at school. He says he’s not sure if the abuse caused his behavior, but “I think it had something to do with [hearing their] screaming in my head.”

Witnessing violence can have lifelong consequences. Children often mimic what they witness at home and think that it is acceptable to make derogatory comments or act violently, says Esperanza Romero, a paralegal at Rainbow Services women’s center in San Pedro.

As an example, Romero mentioned a little boy who had seen his father beat his mother and heard him call her a derogatory name starting with “B.” “The kid starts calling mom ‘B,’ too,” Romero said. “He would say sexually explicit things. He would say, ‘I’m a gangster.’ Kids definitely get affected.”

Many children who experience domestic violence live in fear of losing the parent who is abused. Early in his childhood, Toscano’s biggest fear was that he would lose his mother, the only person whom he felt cared about him.

Witnessing violence has a tremendous effect on school performance, said Rivera, of the East Los Angeles Women’s Center. Homework requires concentration, and, she says: “It’s hard to do homework when there’s fighting at home.”

Depending on the age of the child and the type of abuse they have experienced, treatment centers use different counseling approaches.

Rainbow Services offers individual counseling to teenagers. Because it is tougher for young children to express what they feel or experience, counselors ask them to draw pictures or participate in group activities.

Romero tells the story of a child who drew a picture of his family. His father was holding a gun and a child was standing between his parents and trying to protect his mother.

When Toscano misbehaved at school, his mother feared he would grow up to be aggressive, but never sought counseling for him. Toscano says that his mother’s support was enough to keep him focused and to help him heal from the emotional pain.

“My mom loved me, cared for me, and never turned her back on me,” said Toscano. “I learned a lot about relationships, things I’m supposed to do, no yelling or abusing.”

This month, Toscano graduates from high school as an honor student. Toscano believes he can overcome his rough childhood, break the cycle of violence, and become a good husband and father.

He says he will “be more loving” than his father was. “There are other forms of discipline” than
violence, he said.