Before NKRIOT takes the stage, he dons a futuristic metallic helmet with a mask that covers his face, which allows people to enjoy his performance without passing judgment on his race, color or gender. He plays instruments that he built himself, performing a style of electronic music that some have defined as cyber-punk. Sometimes, there’s also a laser show of his own design,

“It’s very high energy and in your face,” says Kristopher Escajeda, the 28-year-old man behind the mask. “And for the most part, it will be loud.”

He grew up in Boyle Heights, tearing apart and rebuilding electronic equipment, as well as making his own music, since he was 12. He’s been performing consistently since 2014, slowly building a reputation in the underground club scene, finally releasing his self-produced, debut album “Riot” last year. Soon after, LinkedIn hailed him as a “pioneer,” and he has since headlined shows in New York, San Francisco and Miami.

“People who don’t like electronic music tell me, ‘I like that, what are you doing.’ I get that a lot,” says Escajeda.

Raised by his grandparents, he grew up listening to their favorite bossa nova and jazz albums. Escajeda says that he felt “different” from other kids growing up in Boyle Heights. “I was pretty much a loner because I was just weird,” he says. “I was a weirdo, scientist kid.”

He learned how to solder from his grandmother, who worked for the aerospace industry, and he taught himself how to repair and rebuild electronic equipment.

“Most of the stuff that I do now is off self-knowledge and reading books and Google,” he explains.

He was a good student at Theodore Roosevelt High School, but would often get frustrated with what was being taught and the lack of music programs. He dropped out to help out with his father’s mobile knife sharpening business. Six feet tall, Escajeda had to work inside a truck in which he couldn’t stand upright.

“It was physically, mentally spiritually and emotionally exhausting,” he recalls, “when you feel cooped up in a cage all day and you’re just thinking about your music the whole time.” 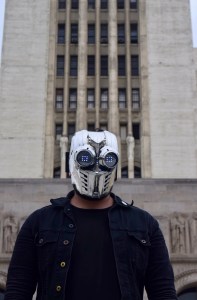 Playing in punk bands as a teen helped him develop his motto of “DIY or DIE,” an “ode to punk rock and being persistent and making stuff happen.”

He and his bandmates were forced to share instruments and fix them if they broke. Today, he builds his own performance equipment.

rHe calls it “the RIOT lab,” a personalized piece of hardware that includes a synthesizer, drum machine and wireless microphone system, all built from discarded and recycled equipment. He also created the big screen where he projects his “live hologram show,” as well as the mask that defines his onstage persona.

He says a lot of people are surprised to hear he writes all of his music on acoustic guitar.

“The way that my ideas come out is more of a cinematic concept,” he explains. “I think about story line, setting, and actors and characters, and that’s what creates the music. So I try to picture this and try to think and create a score for that.”

He has named his style “Goji sound,” inspired by the Asian super food. “It takes the bitter and sweet of all genres and it puts it all together,” he explains.

He produced his debut album and released it on his own label because he got tired of rejections from record labels. The album drew the attention from Linkedin, which interviewed him for the media company’s “in it together” campaign, highlighting achievers in various fields.

“We were thrilled to highlight Kristopher and his extraordinary story as part of the [In It Together] campaign,” said Kenly Walker in an email from Linkedin’s corporate communications officer. “We were inspired by his personal growth and his “do it yourself” attitude as he strove to accomplish his version of success — doing what he loves through music and invention”.

“Kris didn’t let the lack of soundboards, experience, or connections stop him from becoming a live electronic performer and we believed his passion, resilience and drive would inspire our members just as they inspired us.” she added.

As part of the campaign, for which he was not compensated, Linkedin put up a 10-story billboard with his image on the side of a building on Sunset Strip in West Hollywood. The company flew him to performances at the Empire State Building and at their headquarters in the Bay Area

Among his most recent gigs, NKRIOT performed in June at The Echo in Echo Park and in July at The Whisky-A-Go-Go in West Hollywood.

“They gave me the opportunity to state who I am and where I’m from, and what I’m about to my community,” he said of the campaign. “I felt for a very long time that my community didn’t really respect me or understand me. And now they know what I do and know where I am from.”

Photo above by Kelly Salazar.