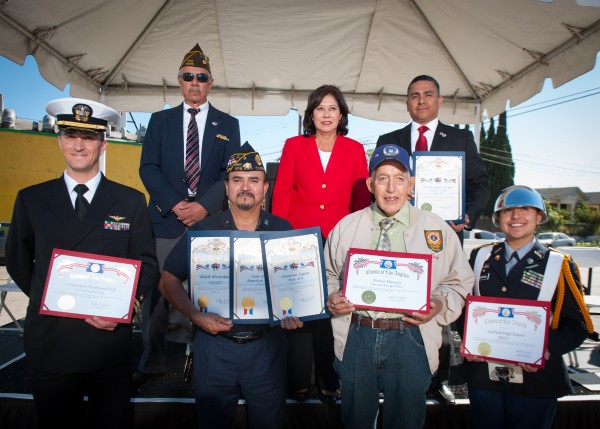 Civic leaders and local residents paid tribute today to Boyle Heights and East Los Angeles veterans of war at an annual ceremony at the Cinco Puntos All Wars Memorial, located in what is also known as Raúl Morín Square. Boyle Heights Beat contributing photographer Eddie Ruvalcaba, himself a veteran, attended the ceremony.

A flower wreath was placed in front of the memorial, a Veterans Day tradition organized by the Veterans Organizations of East L.A. at the famous five-point intersection of Lorena and Indiana Streets and César Chávez Avenue.

The Cinco Puntos All Wars Memorial sits right on the border of Boyle Heights and East Los Angeles.

Attending this morning’s ceremony were Congressman Xavier Becerra, Assemblyman Miguel Santiago and Councilman José Huízar –all three elected officials spoke of the contributions made by veterans of war to the preservation of democratic values. The ceremony was presided by Commander Tony Zapata of the American Legion Post in East Los Angeles and attended by dozens of veterans, including a handful from World War II.

Special tribute was paid to two veterans from that conflict.