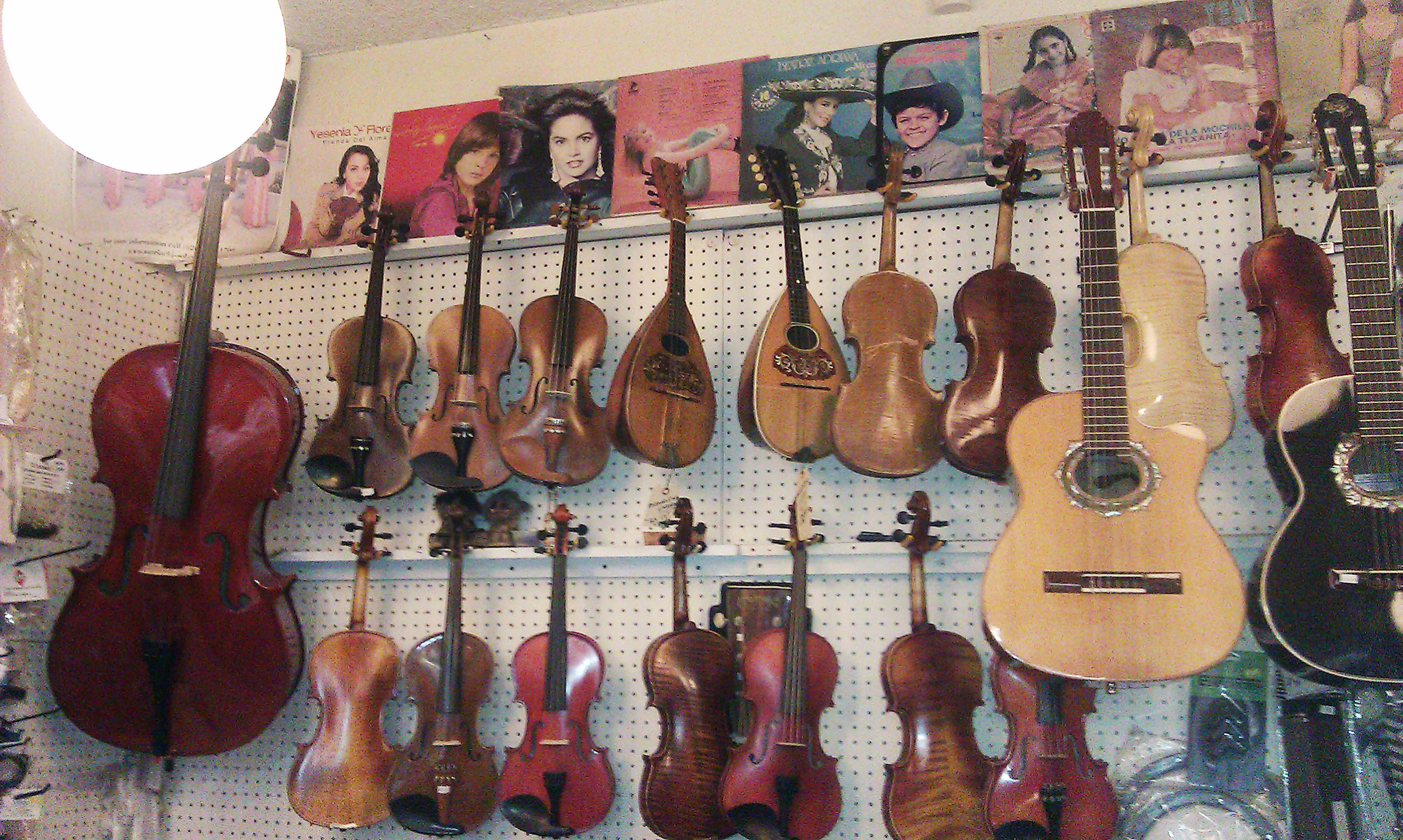 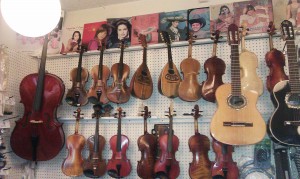 The small, bright orange building with the painted skeleton mariachi holding the guitarrón is located on the corner of First and State streets.   As you near the store’s entrance, you hear the intense horns and high harmonies of rancheros’ songs pouring out from the speakers mounted on the doorframe. The floor vibrates under your feet as you enter.

Inside La Casa del Músico store, the small space is crowded with instruments hanging on the wall and from the ceiling. Glassed-in displays hold an assortment of musicians’ accessories — strings, tuners, straps, picks and more.   The counters are stacked with CDs made by famous and not-so-famous musicians.   The crowded floor space is filled with racks of instruction books and music collections, ranging from mariachi to ranchero to jazz to rock and roll.

Where the walls lack instruments, they are plastered over with signed photographs from every musical group that’s visited the store over the last three decades.

While the store is rich with history, its future is   uncertain.

Decades ago, Rubén and Margarita Ortega started their music business selling CDs at a small stand near Mariachi Plaza in Boyle Heights.   The musicians who gathered on the Plaza started asking for strings for their instruments. The Ortegas subsequently opened a general store near the Plaza, and in 1979, they converted it to La Casa del Músico.

“When we started the store, the mariachi was our first client,” said Margarita Ortega.     Later, the store began catering to jazz musicians, rock ‘n’ rollers ”“ anybody who needs musical instruments.

Sergio Ribera, a local mariachi, knows the owners and greets them by name when he stops by.   The store is convenient, he said. “We need a store here in the plaza so we can buy what we need when we need it,” He said.

Rubén Ortega, 77, has been working long hours at La Casa del Músico for the last 33 years.   He said it takes a lot of discipline to keep a store running that long.

Rubén Ortega is not a musician himself.     He tried to learn guitar later in life, but   his arthritis made it   painful. But he lights up when he talks about some of the famous musicians who have come to the store.

In 2002, Bob Dylan, the legendary folk rock singer and songwriter, was in Boyle Heights shooting the film “Masked and Anonymous.”   The famously private musician sent his assistant ahead of time to let Rubén Ortega know that he was coming. Rubén Ortega said that Dylan saw a guitar, picked it up and sat on the floor playing. Later, Dylan bought a saxophone. The Ortegas still have a copy of the $800 receipt   on a wall.

Gabriel Tenorio is a local musician and composer who co-wrote the soundtrack for the Oscar-nominated documentary, “The Garden.”   He also co-owns Guadalupe Custom Strings on César Chávez Street, where he makes hand-crafted guitar strings. He’s been working with the owners of La Casa del Músico for about seven years. “My company makes the best guitarrón strings in the world, and regardless of how expensive they are, Casa del Músico sells a lot of them,” said Tenorio.

After more than three decades of hard work at the store, the Ortegas want to retire. While the store is up for sale, the Ortegas don’t know yet if it will sell. “Well, there are two or three people interested, but we still don’t know who,” said Rubén Ortega.

Anyone who takes over the business must be young and strong and bring   new ideas, Rubén Ortega said.   “This store could give more, but we are tired,” he said.

Tenorio agreed, saying “It would be my hope that a young business person with vision and discipline would take on that task.”

Some of the local musicians in Mariachi Plaza are not happy about the possibility of the store closing.

Eleno Caro, a member of Mariachi Real de Oro, has been going to La Casa del Músico for 15 years. “It’s better that they don’t retire,” he said.

Tenorio agreed.   He’s lived in Boyle Heights since the late ’70s and remembers how many other companies started in the neighborhood, became successful and then moved to more fashionable areas.   La Casa Ddl Músico would be missed if it closed, he said.

The store has given something important to the neighborhood as a whole, not just to the musicians, he said.   “They stand as a model for a business that invested in the community by staying in the community,” he said.