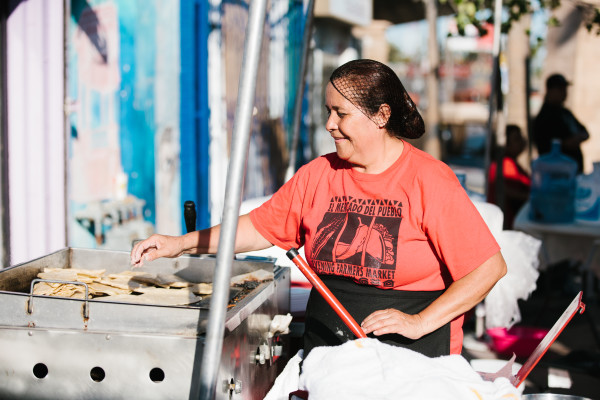 Caridad Vasquez is known for her red pozole. Photo courtesy of ELACC.

Part one of a four-part series.

UPDATE: As City Council prepares to draft a street vending ordinance, it will host four community meetings across the city to gather input from L.A. residents.

Join the first hearing at 6 p.m. Thursday, May 28, 2015 at the Boyle Heights City Hall. bit.ly/LAStreetVendorCommunityHearings.

On any given day in Boyle Heights, vendors set up food stands on sidewalks, hoping the scent of their delicacies draws customers in. Women drape their fences with used baby clothes. And jewelry makers cover their wrists with colorful and luminous bracelets.

These aren’t your typical 9 to 5 vocations, but for many, it’s a way of life.

There are approximately 50,000 street vendors in Los Angeles, according to a November report by the Department of Public Works’ Bureau of Street Services. Although street vending is illegal in L.A., it’s a risk many choose to take.

In recent years, the effort to legalize street vending has sparked debate. Proponents say legalization would bring an economic boon to the city and would help people trying to make a decent living, as well as decrease food borne illnesses. But opponents argue that street vending comes with trash and crowds and poses unfair competition to established businesses.

Although it is difficult to estimate the number of people in the United States who work under the table, researchers say several million people participate. After the economic downturn of 2008, even more people joined this informal workforce.

Those who work in what is referred to as the informal economy do so outside the law, without any government regulation and without collecting sales taxes.

In Boyle Heights, where a vibrant street vendor culture has existed for decades, the majority of vendors are women, and some are at the forefront of a battle to legitimize their livelihoods.

While immigration status and limited education are major reasons that women work in the informal economy, researchers say another reason is because women need to provide additional support to the household and also need work that allows them to care for their children.

“Women face a lot more barriers in getting a formal job than men,” says Yvonne Yen Liu, a researcher with the Economic Roundtable, a Los Angeles-based nonprofit that conducts economics, environmental and social research. “Women still bear most of the responsibility for child rearing and housework,” she noted, so flexible arrangements like street vending are more practical.

Janet Favela, lead organizer at East Los Angeles Community Corporation, says that in Boyle Heights, women are more likely to occupy themselves as street vendors and that men move in and out of the sector, depending on the employment outlook.

Studies show the trend extends globally. Women are more active in the informal economy, especially in Africa and India.

Boyle Heights Beat  will be profiling three women this week who work in the informal economy.

Part Three: Meet Caridad Vazquez, a street food vendor who is fighting for her right to sell on the streets of Los Angeles.