Boyle Heights students and teachers returned to their classrooms Wednesday, hours after members of the United Teachers Los Angeles union voted  to ratify an agreement with the Los Angeles Unified School District that put an end to a six-day strike. 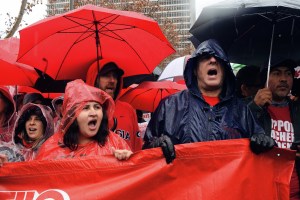 LAUSD teachers and supporters protest on first day of strike, on January 14, 2019.

“It’s been the longest week ever,” said Zitlalli Sánchez, a 17-year-old senior at the Math, Science and Technology Magnet Academy (MSTMA) at Roosevelt High School. She was one of dozens of Roosevelt students who joined the picket lines last week and marched alongside educators outside of her school.

More than 30,000 LAUSD teachers walked out on Monday, January 14, smaller class sizes and better wages among their demands. It was the first teachers’ strike in  nearly 30 years in Los Angeles.

A sea of teachers and supporters dressed in red took over Boyle Heights schools, as hundreds of area teachers picketed in front of their schools, starting at 7 each weekday morning. Locals also participated in rallies at Grand Park in downtown Los Angeles and even marches from City Hall to LAUSD headquarters.

The cold, rainy weather didn’t stop educators and supporters from Boyle Heights and all over the district from joining in the teacher’s stated fight for higher salaries and better reaching conditions. 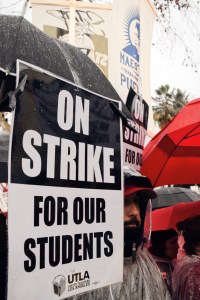 All area schools remained open during the strike, but many parents chose to keep their children home.  On Friday, Boyle Heights Beat reported that less than 100 students attended Francisco Bravo Magnet High School and less than 30 students went to classes at Méndez High School. (On Wednesday, the LAUSD said that decline in attendance cost the district as much as $151 million in government funds.)

Protests continued through the Martin Luther King holiday on Monday, while representatives from the union and the district met for negotiations. An agreement between UTLA and the LAUSD was announced Tuesday and sent to the union membership for ratification.  Union representatives said an overwhelming majority of teachers voted in favor of the agreement, although a final vote tally was not announced Wednesday.

The three-year agreement includes a 6% salary increase, smaller class sizes (reducing classes by 4 students in grades 4 through 12) and increasing support staff such as nurses, librarians, and counselors across LAUSD schools.

“While the agreement may not be everything that we wanted,  I feel like it’s a step in the right direction in changing the relationships between teachers, community, district, and political leaders.,” said Alice Im, a teacher at MSTMA.

“UTLA leadership finally reflects teachers’ values of racial and social justice manifested in improving conditions in one of our most vital public institutions,” she said,  adding that she is optimistic about the future of education in Los Angeles.

Many Eastside students said the strike represented  a clear example of teachers practicing exactly what they had taught students in the classroom – to stand up for what you believe in.

“I think it’s amazing for them, that they’re actually going out there,” said 17-year-old Roosevelt student Leslie García during the strike. “They’re fighting for themselves and the students so they can have a better future.”