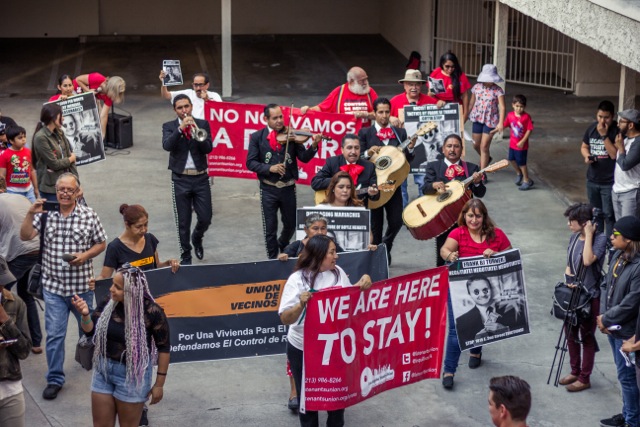 Thirteen tenants who went on strike to protest what they considered unbearable rent increases –including several Mariachi musicians– have reached an amicable agreement with their tenant that allows them to stay in their Boyle Heights apartments under rent control through 2021.

“After extensive talks and negotiations, the dialogue between the parties has been successful in arriving at a compromise solution with which all sides are content,” read a statement released Tuesday by Unión de Vecinos, a local tenants’ rights group that helped the tenants negotiate the agreement.

Unión de Vecinos organizer Elizabeth Blaney said the 13 tenants reached a 3 ½ year collective bargaining agreement with Frank BJ Turner, who owns the apartment building at 1815 East 2nd Street, a block south of Mariachi Plaza.  Under the agreement, the striking tenants will get an immediate rent increase of 14%, then a rent increase of no more than 5% yearly during the duration of the contract. At the end of the contract, the agreement calls for a new round of negotiations between the tenants and the landlord.

The 13 tenants who were on strike for as much as nine months also had a portion of their unpaid, back rent forgiven. Blaney said the landlord also agreed to repairs throughout the building.

The agreement does not apply to the other 12 tenants in the building, which is not protected under the city’s rent control laws, because it was built after 1978.

Boyle Heights Beat was unable to reach Turner. The landlord had been expected to make a statement at  a contract signing celebration at the apartment building on Thursday evening but did not show up –instead sending flowers and pizza for the celebration.

The conflict between the tenants and the landlord goes back to January of 2017, when seven of them received notice of rent increases ranging from 60 to 80% –as much as $800 a month increase in one reported case– going into effect April 1.

The tenants protested, claiming  they were being displaced to make way for the development of high-end, luxury dwellings at the building. Ironically, the landlord’s management company began to promote the building as Mariachi Crossing –touting its proximity to Mariachi Plaza and its Gold Line metro station even as tenants who were Mariachi musicians found themselves at risk of being displaced.

In April they refused to pay the rent increases and in June they received eviction notices.

They attempted to meet with the landlord several times, but said they were refused. Six other tenants joined the strike and with support from Unión de Vecinos, Defend Boyle Heights and other groups, they staged several protests, some involving the Mariachi musicians.

On Wednesday Blaney said the agreement signals a new period for Boyle Heights tenants threatened by displacement in neighborhoods affected by gentrification, even if they are not protected by rent control.

“Once tenants exercise their rights, and with the help of their allies, they can accomplish [a lot],” Blaney said. “This will encourage dialogue between tenants and their landlords. It’s a big change.”

Listen to a story here about the tenants’ protests as part of the BH Youth Radio Project.