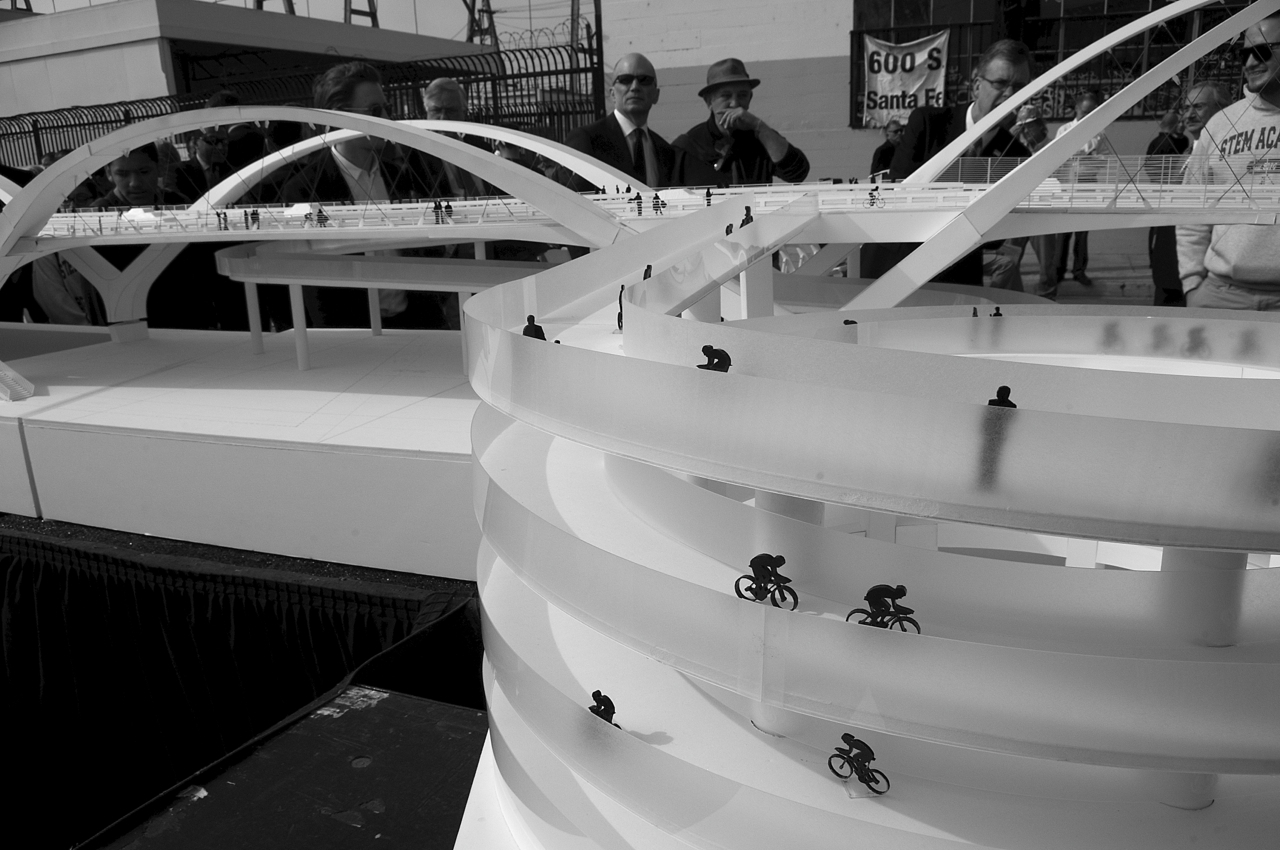 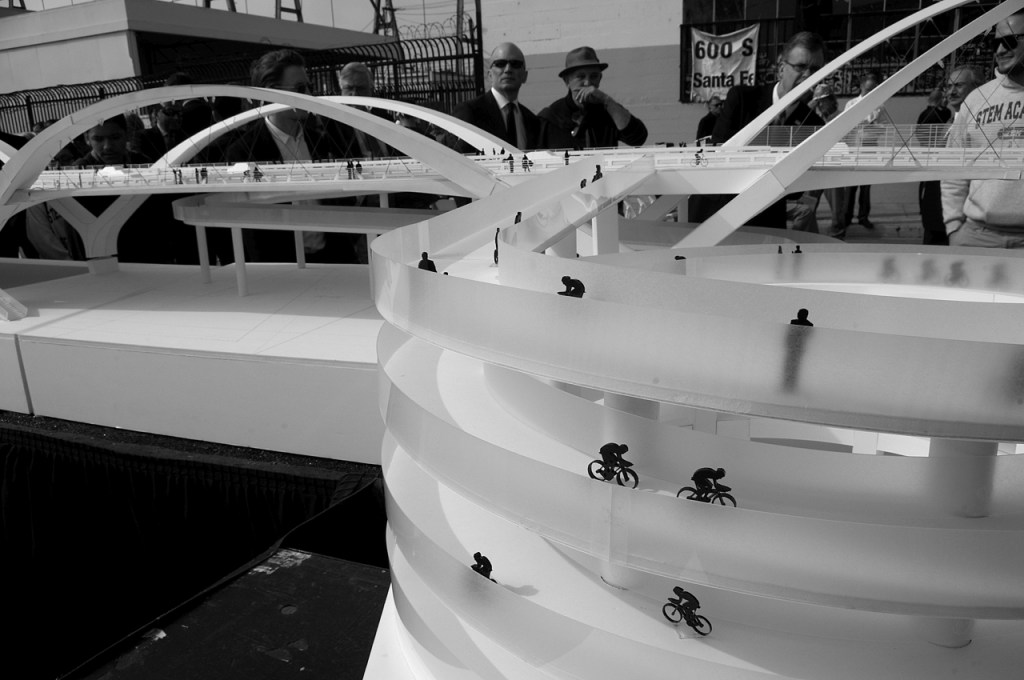 Cyclists spiral their way down what appears to be a skateboarder’s dream-ramp to the riverbed and park area from the model deck of the 6th Street Viaduct. Sahra Sulaiman/Streetsblog L.A.

“It’s not every day that you get to be present at the birth of a landmark,” said Mayor Eric Garcetti to the hundred-plus members of the press, city notables, transportation advocates, elected officials, and residents gathered under the slowly crumbling columns of the 6th St. Viaduct.

Although Friday was celebrated as the groundbreaking for the massive, $420 million 6th Street Viaduct Replacement effort, “groundbreaking” is a bit of a misnomer.

Earth was definitely thrown, via these handy ceremonial shovels (below), but we’re still a little ways off from seeing actual bridge-specific ground being broken. And the viaduct itself will not be completed until 2019, at the earliest.

A number of intersections in both the arts district (west of river) and Boyle Heights (east of river) must first be reconfigured to accommodate re-routed traffic before the existing bridge can be closed and demolition can begin.

According to representatives of the Bureau of Contract Administration (BCA), Central Ave. and Whittier Blvd. will be the first streets targeted for reconfigurations in the next few weeks. The remaining intersections will be upgraded shortly thereafter.

Once that process is completed, the bridge will be closed to traffic and they will be able to begin demolition. Although currently looking at July for the tentative closure, the BCA representatives felt that might be an “aggressive” estimate.

The reason? There are an awful lot of moving parts in a massive project that spans 3500 feet, a rail yard, an industrial zone, and two residential communities.

The city is still working to acquire several parcels of land underneath the bridge. As seen in the (hideous) photo from the October presentation of the bridge model, the new footprint of the bridge differs slightly from that of the existing bridge, necessitating the removal of some structures.

Demolition of at least one of those structures, along Anderson St., has already taken place. But many more are yet to come. 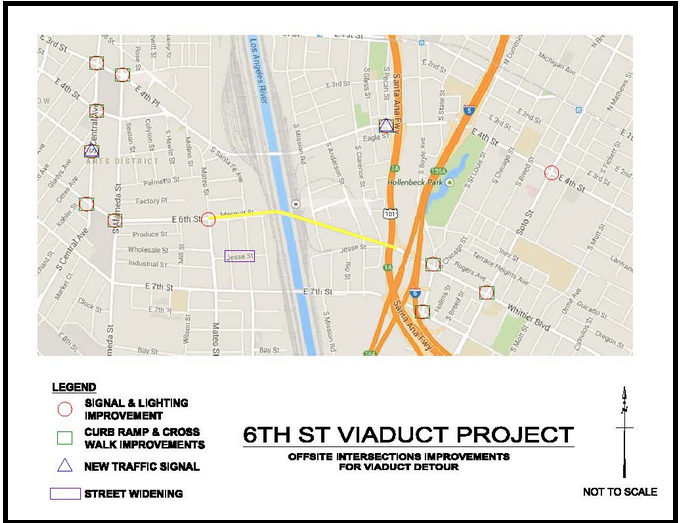 The intersections slated for improvements to help accommodate the increase in traffic they will see during the period the viaduct is closed. They now number 12 instead of 20. Source: Sixth Street Viaduct Replacement Project.

The slower pace of the viaduct replacement effort did little to stem the enthusiasm of the elected officials on hand to celebrate the groundbreaking.

Garcetti spoke glowingly of the opportunity the project presented the city to champion a new approach to streets and transportation. The forward-looking multi-modal design of the bridge, he said, would “change the way we move as people change the way they move” and prove that Los Angeles has the unique capacity to “re-imagine and re-create things we think we’ve seen before.”
“For so many years, we’ve had our back to the river,” he continued. By turning infrastructure into a destination, “we’re going to [be able to] embrace it.”

Finally, Project Labor Agreement jobs that could go to local residents, he hoped, would help them feel that they owned a part of L.A.’s future. And that those men and women would one day be able to bring their children to witness what they had contributed to the city.

The community-building and people-centric aspects of the bridge were ones that all of the officials who spoke seemed to return to.

Jose Huizar, Councilmember for CD 14, underscored the importance of building a destination and prioritizing all modes of transportation. State Senator (and president pro tempore) Kevin de León linked a people-centric planning process and bridge to improvements in public health, the reduction of carbon emissions, and the creation of a place where people ”” regardless of their status, heritage, or income ”” could come together and forge stronger communities. Assemblymember Miguel Santiago declared that it would “change the way we do projects” from here on out.

Architect Michael Maltzan, whose firm was responsible for bringing the design to life, reiterated that the bridge was “more than a crossing”¦more than a simple span,” and that it illustrated that L.A. had the capacity to think about infrastructure as being accessible, beautiful, and integrated into the life of the city and its people.

Despite everyone’s enthusiasm for multi-modality and people-centrism, it still isn’t clear how protected cyclists will be on the bridge. Bike lanes are definitely part of the design ”” there is space for them on the roadway. But, according to a few sources I spoke with today, although the ideal bridge would include fully protected lanes, cyclists may have to settle for lower-cost methods of protection such as plastic bollards.

The only thing that is sadly clear is that cyclists diverted to the 7th St. or 4th St. bridges during construction will have even less protection than they already do. No lanes are being striped there, meaning folks will essentially be on their own against heavier-than-usual big truck traffic.

Read the full story at la.streetsblog.org