The countdown for the Sixth Street Bridge has officially begun.

City officials say demolition of the bridge will begin the first weekend in February, nearly a month after the originally announced date. Demolition will begin on the east side of the Los Angeles River, on a portion of the bridge that crosses over the 101 Freeway. For safety reasons, a small section of the freeway will be shut down for 40 hours.

The city says the Sixth Street Viaduct, as it is officially know, needs to be replaced because of a chemical deterioration of the structure’s concrete pillars. It is being replaced with a modern structure as part of a $445 project that will include bike and pedestrian lanes and an eight-acre park underneath.

Demolition of the 3500-foot long bridge which connects Boyle Heights with Downtown Los Angeles is expected to take nine months. The city says the bridge will permanently close to traffic at the end of January. Signs posted near both entrances of the bridge say Sixth Street will be closed off on January 27, a date confirmed this week by Councilman José Huízar’s office.

City officials say they are working to minimize inconveniences and confusion caused by the closure and ensuring that all road detours are clearly marked. Boyle Heights residents are being asked to plan ahead; drivers are warned to expect delays and asked to follow detour signs to alternate freeways. 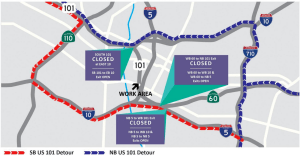 Traffic detours announced will be as follows:

When traveling N/B 5 from the Orange County area approaching the 5/10/101 Interchange:

When traveling W/B 60 from the Pomona area approaching 5/10/101 Interchange:

When traveling S/B 101 from the San Fernando Valley area approaching the 10/101 Split:

101 Freeway On-Ramp closures will be as follows:

This post was edited on January 21 to reflect confirmation of bridge closure date.