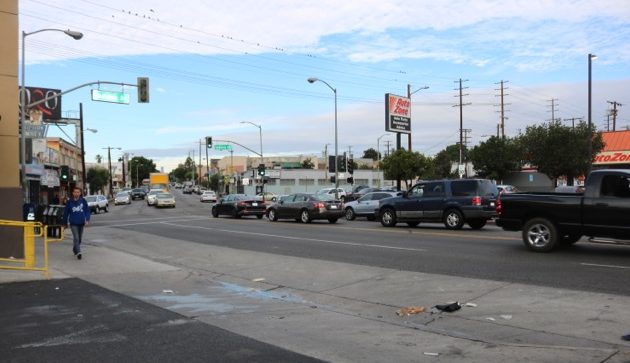 A Los Angeles County Sheriff’s Department car ran into a mother and two children Thursday night near the East Los Angeles border with Boyle Heights, killing both the seven- and nine-year-old and critically injuring the woman.

The deputies were responding to a radio call of shots fired when a three-car crash occurred near the busy intersection of South Indiana Street and Whittier  Boulevard. The collision sent the deputy’s car onto the sidewalk where it ran into the mother and two children. One of them died at the scene and the other in the hospital.

The Los Angeles Times reports that the mother is in critical condition.

The multiple vehicle crash caused another car to injure other pedestrians. Eight people were transported to the hospital including two deputies. The Times said that the Los Angeles Police Department is investigating which driver is at fault. All drivers remained at the scene.

This crash occurred less than a week after a speeding car crash killed 11-year old Elektra Yepez. She and her family were at a taco stand in Boyle Heights when a speeding Mustang hit a parked car which was sent into Yepez, pinning her against a wall.

At a Taco Tuesday fundraiser this week, community members rallied to raise nearly $10,000 to help pay for the girl’s funeral.