“You looking for a good time?”

“You’re too pretty to be looking all mean. Why don’t you give me a smile?”

These kinds of words are not unusual to many girls and women. Hearing them is an ordinary experience for women, both young and old.

Girls begin to experience this behavior at early ages, and studies show the impacts are long-term. The behavior is so pervasive that many girls grow up thinking it is normal. They may not even recognize it as harassment. It’s a problem across racial, cultural, and income divides.

A 2017 survey from Cornell University found that 85 percent of 2,238 respondents reported experiencing their first encounter with “street” harassment before 17; 11.6 percent report it happened before 10. The survey also probed how this behavior impacts women’s lives: half of respondents changed their clothing, refused a social event or chose different transportation options because of it.

“I find harassment and catcalling annoying and super unnecessary. It’s something that creates uncomfortable environments for females just trying to have a normal day,” says Sonia Arreguín,17, a Roosevelt High School senior. 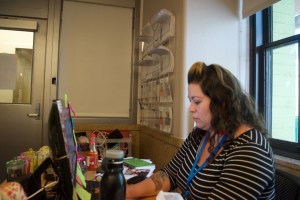 Hilda Franco, director of the East Los Angeles Women’s Center, believes that sexual harassment fits under the category of sexual violence –which she defines as any unwanted act of a sexual nature.

She says a common misconception is that women can prevent harassment. But something as seemingly simple as imposing school dress codes sends a negative message to girls more than to boys. “When you’re telling women, ‘You can’t show your shoulders,’ you’re sending them a very bad message,” says Franco.

Los Angeles Unified School District has dress codes governing skirt and short lengths, as well as rules against spaghetti straps, off the shoulder or low-cut blouses. Boys are generally required to refrain from wearing oversized clothing or gang-related attire.

Some say these policies affect the girls’ self-expression. Others say rules like this begin the practice of victim blaming. Franco says some parents unknowingly participate in victim blaming in an effort to protect their daughters.

“My mom’s always like, ‘You need to have respect for your body, so you’re not going to go out there wearing a tank top,” says Ixchel Boch, 17 , a junior at Felícitas and Gonzalo Méndez High School.

Social media and the internet have become popular platforms for harassment, too. A 2014 survey by the Pew Research Center shows that 26 percent of young women aged 18-24 have been stalked online and 25 percent have been sexually harassed.

Michelle Serratos, a junior at Méndez High School and a member of Quetzalli Mariposas, a young women’s social justice club at Méndez, says in the past, boys have targeted the club members in person and on social media because they are a “feminist group.”

Earlier in the school year, a few football players targeted Quetzalli Mariposas on Snapchat, and the post went viral. The caption called the group “untouchable” and attached a photo calling the girls “bitches.”

The girls took the matter to the administration. “I felt uncomfortable,” says Boch, a member of the Mariposas. “There was a really bad vibe, and if you walked alone, it was horrible.”

The girls say the behavior went on for about a month before the administration threatened the boys with being removed from the football team. The situation eventually improved.

(Boyle Heights Beat attempted to contact the principal numerous times about the incident and policies regarding harassment, but requests for an interview went unanswered.)

Franco, who holds training programs for young women, says it’s important to empower and educate youth about appropriate behavior with the opposite sex.

Karla Ortiz, 19, says she didn’t always know how to speak up when she experienced something that felt like bullying or harassment. Now a youth organizer at East La Women’s Center, she helps guide young girls.

“I learned that as an individual, my voice does matter, and I need to project my voice,” says Ortiz.

“There’s nothing wrong with complimenting someone for how they look, but to go as far as to harass and catcall, and make them feel uncomfortable or unsafe, it’s just pathetic,” says José López, 17, a Roosevelt High School junior.

López says many of his female friends experience harassment daily, and many of his classmates don’t seem to understand the impact of their comments.

“There could be many reasons for why men do it, but no reason is good enough to make women feel like an object, rather than human,” says Arreguín.