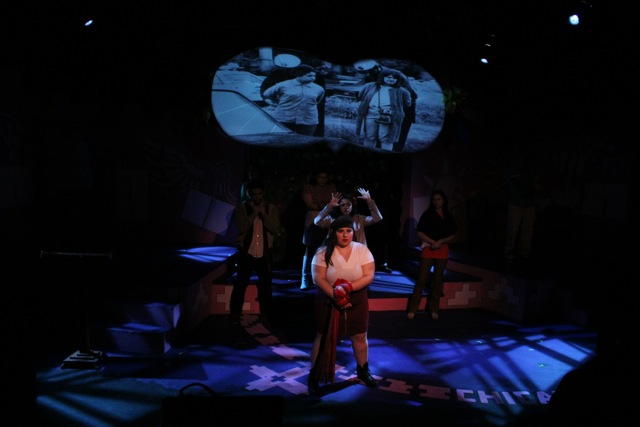 The producers opened with a couple of disclaimers and trigger warnings on strong language, gunshots, and rape scenes. It was the opening night of “Chicanas, Cholas y Chisme VI: Stand Up! Speak Out!,” a 12-play festival of works written by Latinas returning for a sixth year to Casa 0101, for a run through April 19.

Several of the plays have references to current social issues, such as the #MeToo movement and the rescinding of DACA. This time the producers wanted to focus on the healing aspect of womanhood, and representatives from the East Los Angeles Women’s Center were outside the theater providing mental health resources for the attendees.

Act I consisted of powerful, more dramatic plays: the night began with one titled November 8th, written by Elvia Rubalcava, centered on a group of women and their reaction to the 2016 election. Suzanne Linares’ Cycles, in which she captures how not speaking up at times of injustices can lead to scars being passed, was my favorite.  In Once Upon a Time… Con DACA, Rocio Diaz tells the story of an undocumented student, all her fears and how she overcomes them to prove how worthy of a legal status she is. Act II consisted of more comedic plays which still had the same powerful touch. MX/MRX, written by Cinnamon Rivera, spotlights the big issue of non-binary folk who still have to use gendered restrooms. The machismo within the Chicano movement – a topic rarely discussed– is touched in the second-to-last play, Regrets, written by Maria G Martinez.  Since it talks about the big issue of men in leadership roles taking advantage of a woman organizing, it seemed an appropriate play, now that some of Hollywood’s most beloved actors and players are being accused of abuse.

The night closed with The Blowouts, where actors named the laws and organizations that came out of the 1968 school walkouts. The play was written by Josefina Lopez, Founder and Artistic Director of Casa 0101. Producers warn the show contains strong adult language and mature themes and recommend that minors under the age of 17 be accompanied by an adult. Even though some very heavy topics were performed, there was a lot of comic relief throughout the plays.  Anyone who is interested in having a laugh and fun night should totally check out this production.

Carmen González is junior at Felícitas and Gonzalo Méndez high school. She loves organizing with the community and is hoping major in Political Science.

This post was edited on March 22 for clarification and to correct date of ASL performance.