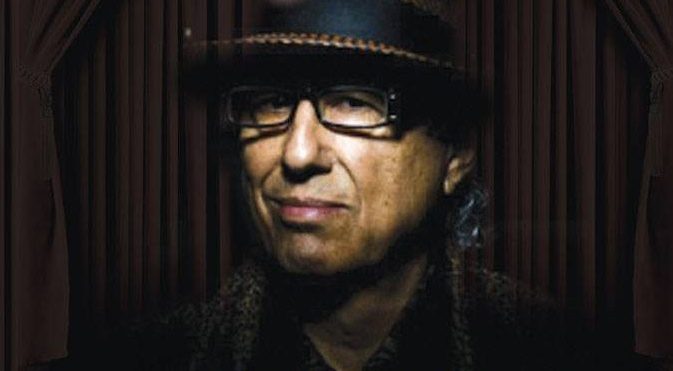 Anyone who’s into the so-called Sound of East Los Angeles –or has any level of interest in the music produced and listened to in the Eastside during the 50’s and 60’s, and all the way to the present date– should run to see “Confessions of a Radical Chicano Doo-Wop Singer” at Casa 0101 before the end of the month.

The new one-man-show by Ruben Funkahuatl Guevara is the latest creative concoction of one of the longest-playing performers in the Los Angeles scene.  It’s the latest reincarnation of one self-described “committed Chicano Culture Sculptor” who, at age 73, shows no sign of slowing down.

Guevara’s achievements are plenty: in his early 20s he was performing soul music live on national television alongside Bo Diddley and Tina Turner (forced to perform with the name Jay P. Moby no less) and later was chosen by Frank Zappa to give life to the band Ruben and the Jets, which toured with the Mothers of Invention and opened for Three Dog Night among others. A friend and frequent collaborator of Cheech Marín, Guevara has produced some of the most definitive collections of East LA rock music in vinyl.

But as Guevara lets you know early in the one-man-show, the highs did not come without plenty of lows. In around 90 minutes, with the frequent use of some clever graphics, the veteran performer retells a fascinating life in music and the arts that will surprise many, including those who have followed him for years. Among the highlights, his embracement and defense of the term “Chicano,” including during a promotional tour for “Born in East LA” in Mexico, and his turn to celibacy and tantric philosophy, which led him to the adoption of “Funkahuatl” as a middle name (a combination of funk and nahuatl, the language of the Aztecs). Music fans as well as serious scholars will benefit from his wonderful insights into the entertainment industry.

The show is far from perfect. The pacing slows down a bit in parts, and Guevara, who reads most of the performed text, was still fumbling with his script during a performance the first weekend.  The show could use a little more music, especially since Guevara doesn’t seem to have lost his chops, in the few moments when he does sing. Dan Kwong’s directing generally works. A running gag with a ringing telephone, that involves Guevara walking ever less enthusiastically from the podium to the device, was performed to perfection every time.

Despite its minimal flaws, “Confessions of a Radical Chicano Doo-Wop Singer” is a delightful and inspiring review of the life so far of an important artist with much yet to give. A lesson for those who did not live through his times and a great refresher for those of us who have.