Rubén Funkahuatl Guevara remembers the moment that helped him define his identity. 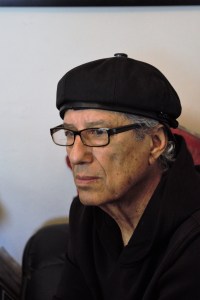 It was during a pilgrimage to Mexico in 1974, where he went searching for his ancestral roots. There, in his father’s birthplace, the young rock singer felt that he was seen as an American and not as a Mexican. He recalled then what he had learned in a Chicano studies class a few years earlier.

“Chicano is not an ethnic term. It’s a political term,” he says.  “It’s a Mexican-American activist committed to the development and enhancement of the legacy of the Mexican- American people. I decided then that’s what I am, and decided to become a Chicano artist. I was climbing a pyramid in Palenque when I came across this realization and proclaimed that I am Chicano, and I am a Chicano artist.”

Guevara told that story during a live interview this summer on Boyle Heights Beat’s #RadioPulso podcast, where he came to talk about and read from his new memoir “Confessions of a Radical Chicano Doo-Wop Singer” (University of California Press, 2018). In 373 pages, the 75-year-old musician, writer and activist honestly recounts a life filled with successes and brushes with stardom as well as disappointment and tragedy –everything that led to reshaping his life as what he now calls a “Chicano Culture Sculptor.” 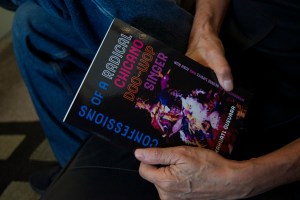 In a blurb on the inside flap of the book’s cover, Terezita Romo, author of “Malaquías Montoya,” wrote: “Guevara utilizes intimate vignettes and inspiring poetry to chart his personal and artistic evolution into an ‘artivist,’ a socially committed artist. His memoir is also an invaluable academic resource, documenting an extensive yet long ignored history of LA’s cross-cultural artistic hybridity and sociopolitical contributions exemplified by Guevara’s 50-year career.”

Guevara was born in Boyle Heights, but was raised in the Santa Monica barrio of La Veinte. His father was a Mexican musician on tour with his well-known trio when he met his Mexican-American mother. Guevara gained notoriety as a young man, first performing as a doo-wop singer on television and later touring with Ruben and the Jets, an experimental rock band co-founded with Frank Zappa. During his career he performed with Johnny Otis, Bo Diddley, Tina Turner and Celia Cruz. He was a consultant on several of Cheech Marín’s movies, including “Born in East L.A.,” and also fronted the bands Con Safos and Eastside Luvers. 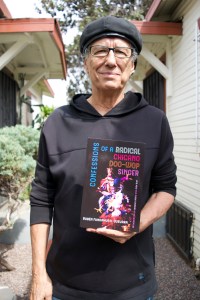 He returned to live in Boyle Heights in the 1980s and has since produced various compilations of Chicano rock and rock en español recordings. He is a performance artist, poet, short story writer, historian, journalist and activist; in 2016 he presented a stage version of “Confessions of a Radical Chicano Doo Wop Singer” as a one-man-show at Casa 0101.

On the podcast he talked about the meaning of the song “Con Safos,” which he wrote shortly after returning to Los Angeles from that 1974 trip to Mexico.

“It was a tag that was put on your placa, on your tag on the wall,” he explained about the recurring symbol in his work. “Beneath it you wrote C/S, and that protects you from danger, it protects what you wrote, nobody else can write anything against it, so it was like a protective symbol. And I reinterpreted it to mean a symbol of self-determination and a symbol of self-actualization.”

When asked to read from his memoir, he chose the poem “Virgencita de Boyle Heights,” which he said was inspired by a visit to the small town of Ajijic, near Jalisco’s Lake Chapala, during a promotional tour for “Born in East L.A.”

“Every town has their own little virgen, so I decided to make one for Boyle Heights,” he said.

Since its release in April, his memoir has been well received, especially by several of his colleagues. 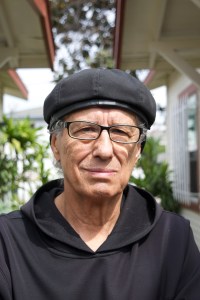 “It is difficult to imagine that there was ever a Los Angeles without him,” musician Louie Pérez, songwriter and member of Los Lobos, wrote on another blurb on the inside flap. “It was as if he rose with the first East Los Aztlán sun that gave creative light to the barrio. In this book, Rubén provides us the opportunity to grab hold of his belt loop and allow him to walk us through his sometimes glad and sometimes sad but always inspiring life. Hang on tight.”

UC Berkeley Professor Kurt C. Organista, writing in the Los Angeles Review of Books, called the book “a fresh and intriguing, heartfelt and insightful cruise through the main thoroughfares, side streets, and alleyways of Chicano rock ’n’ roll, performance art, and Los Angeles cultures, past, present, and beyond, seamlessly written by this first-time author.”

In the interview, Guevara said the reviews have inspired him to continue writing.

“I don’t know if I’m going to perform anymore as a musician, for a while anyway.” he said. “I’m getting up there in age, at 75, still kicking.  So now I’m just going to concentrate on writing.”

He’s started a collection of his short stories and will consider doing a follow up to his memoir, which took him five years to write and get published.