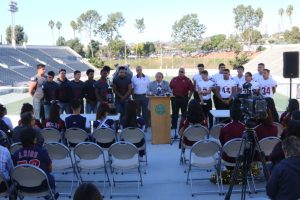 On Friday Nov. 4th, Boyle Heights and East L.A. put it all on the line, as a new wave of players take the field to participate in this traditional ritual of rivalry between Roosevelt and Garfield High Schools. The Classic is as much a part of Boyle Heights and East LA as César Chávez Avenue (formerly Brooklyn) and Whittier Boulevard are to these respective communities.

After last year’s win, Garfield is looking to make it seven straight victories, while Roosevelt looks for redemption. As of the 2015 game, along with the 6 ties, Roosevelt leads with 41 wins to Garfield’s 39. 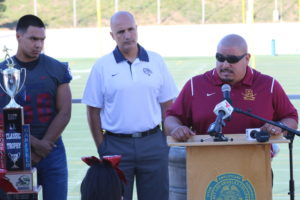 At a press conference Wednesday at East L.A. College’s Weingart Stadium –where the game will be played on Friday– players, administrators, and class presidents came together to weigh in on the rivalry and the results.

“On Friday, the communities will come together to celebrate their pride,” said Roosevelt High principal Ben Gertner, who emphasized the classic’s tradition. Mario Cantú, Garfield’s principal, shared the sentiment as he said the classic is the “most anticipated community event of the year.”

Class presidents on both sides expressed their pride, excitement and what it meant to be part of the tradition as they took the podium. “This is solely an emphasis on pumping the pride,” stated Roosevelt President Briana Osuna. Her counterpart, Angel Padilla, showed off his colors by saying that he takes pride in “being an East L.A. Bulldog.” 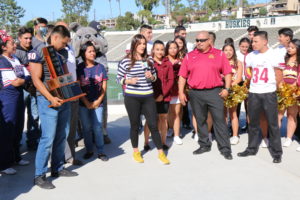 The two teams face off before Friday’s game.

Garfield boasts a 6-3 record while Roosevelt –with many new faces on the team, including first year coach Richard Zepeda– is 1-8.

“If it wasn’t for these players we wouldn’t have the classic,” stated Zepeda after thanking Roosevelt administration for the opportunity to share his vision. Although he admits that his team doesn’t have things going their way this year, Zepeda hopes that what his players “learn on the field, [they are] going to use for the rest of their lives.” 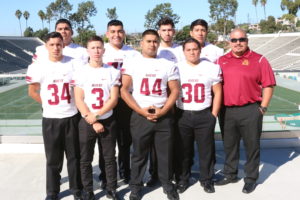 Coach Zepeda and the Roosevelt team.

Given that both coaches are bald, it wasn’t much of a bet. Mike Flores, who was the conference’s emcee, suggested maybe having the loser grow out their hair instead. After a couple of chuckles, the conference was over and the teams were back to their game faces as they fielded questions from the press.

As communities diversify and the old becomes the new, some of the traditions remain. From the tacos in almost every corner into the wee hours of the night, to the raspado and elote man just trying to make a buck, one truth remains: whether you’re a Bulldog or a Rider, it is only right that when these two communities get together… it’s a Classic.

The East LA Classic will be played Friday, Nov. 4, 4 p.m., at Weingart Stadium, 1301 Avenida César Chávez, Monterey Park. Tickets are available at each school ($10 for students and $12 for adults) and on game day at the stadium ($15).

Photo above: Members of the Roosevelt team face rivals from Garfield, who are looking for a seventh consecutive win at the East LA Classic. All photos by Erik Sarni.