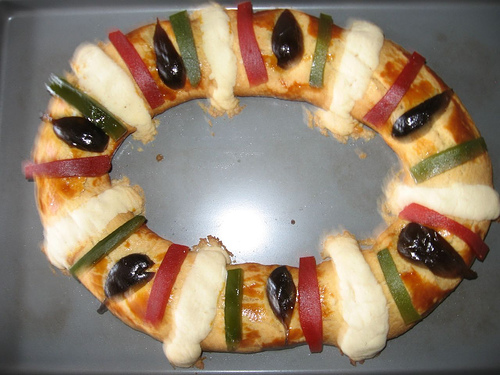 Throughout Los Angeles, dried up Christmas trees can be found on street curbs and garbage cans; decorative lights have been removed from many rooftops; and traffic is back on the highways.

But has the holiday season really come to an end? For many Latinos, the holidays continue until Jan. 6, “El Día de los Reyes Magos” or “Three Kings Day.”

The Christian holiday of Epiphany represents the last of the twelve days of Christmas, when the three wise men arrived at Bethlehem bearing gifts for baby Jesus.

Several rituals are celebrated in Mexico and other Latin American countries including leaving gifts near the shoes of small children and gathering to eat ‘la Rosca de Reyes’, a ring-shaped sweet bread with a baby Jesus figurine hidden inside.

Bakeries across Boyle Heights have been preparing for a busy weekend, arguably the busiest day of they year. Trucks began delivering the culinary treat this week at El Pavo Bakery on Cesar Chavez, where a makeshift sign on their front door advertises roscas of various sizes from $10 to $30.

La Favorita Bakery on 4th Street makes their roscas on site and recommends people make their purchases early. Roscas will be sold at a discounted price Friday varying from $7 to $22 but prices will rise from $10 to $25 by Saturday.

Rebecca Vega and her son Jose held off buying their rosca at the local supermarket Thursday but say they may instead purchase it from their favorite bakery.

“We try to buy the rosca at least one day before because we know they run out,” said Vega.

For the Vega family, the rosca de reyes is a tradition that has been passed down generations”” much like many immigrant Latino households. Vega, who was born in Los Angeles but raised in Sinaloa, Mexico, values the celebration as an important part of her culture.

“It’s an excuse to get together with family and friends,” said Vega. “We did it in Mexico and now we do it here.”

Twelve-year-old Jose says he will share the rosca with his children one day.

Baker Antonio Angeles from La Fama Bakery in East Los Angeles demonstrates the rosca-making process in the video below. Will you be celebrating El Día de los Reyes Magos with a rosca?