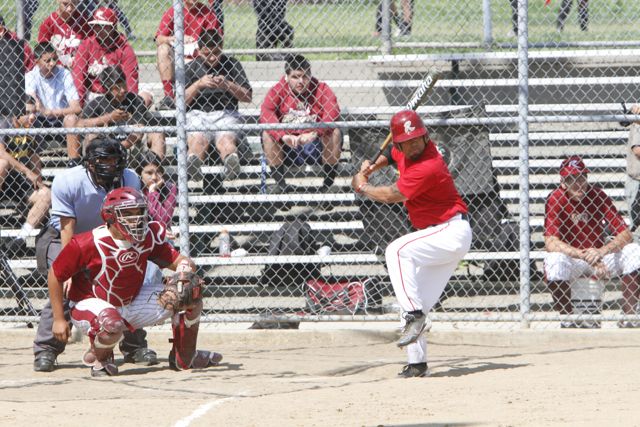 In a game with nothing but bragging rights at stake, the Roosevelt High School varsity team defeated the alumni, 6-5.

Miguel Torres, a 1991 Roosevelt graduate, organized the event. “The kids need funding for tournaments and equipment. We try to show the kids that they do have alumni that have all their support,” Torres said.

He went on to add that kids need to know that there are places outside of Boyle Heights or East Los Angeles. “I’m a product of this community and I’m here trying to help out anyway I can,” Torres said.

Mike Flores, who has been part of the Rough Rider family for 27 years as athletic director and sports announcer, threw out the ceremonial first pitch.

In attendance was former school principal Sofia Freire, who graduated from nearby Wilson High School in 1990, but has been part of the Rough Rider family since 2007. “Events like these demonstrate the RHS spirit. It goes beyond sports, it’s about the program growing,” Friere said.

With the alumni leading 5-3, the varsity began their comeback thanks to some sloppy defense by the alumni infield. The varsity team took advantage scoring two runs in the sixth inning to tie the game at five. After the alumni went down in order in their last at bat, the varsity team finished the comeback when senior Jesse Sedano connected for a walk-off single.

“The end result doesn’t matter. This is for the players, parents, and everyone who donated to help our program. We have a tournament in San Diego coming up; everything we made today is for that trip,” Head Coach Ray Ruiz said, after the game.

Contributions to the program were made by El Tepeyac Cafe, Teresitas Restaurant, and Steven’s Steakhouse. Each donated $25 gift cards that were raffled throughout the game.

“It was a great day for baseball. We always have to give back. We have been approached by Garfield High School to play an alumni game, but we are not interested. We have to take care of our kids and program. We have to show our Roughrider pride,” Torres said after the game.