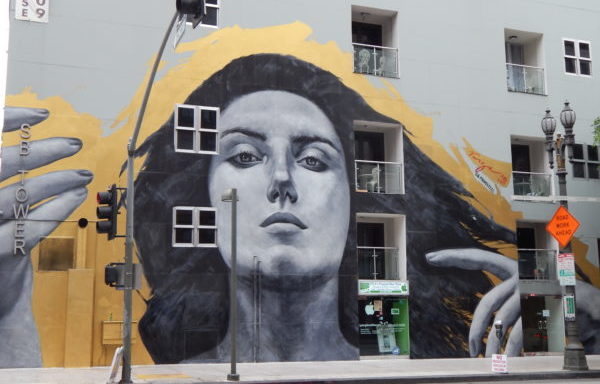 Surrounded by paints, charcoal and paint brushes, muralist Robert Vargas kneels over drawing paper spread on the sidewalk underneath his mural, “Our Lady of DTLA,” illuminated by downtown city lights on a spring weeknight. He methodically uses his hands to smear charcoal, creating a nose, jaw, lips, hair and ears.

During a monthly Art Walk sponsored by DTLA, Vargas chooses passerby in the crowd to become part of his “portraits of Los Angeles” series, for which, he says, “the sidewalk is my studio.”

“What I like to do is open up my process for people to be a part of,” he adds, “so they can see, also interact and take part in.”

The “Our Lady of DTLA” mural is the backdrop for his monthly sidewalk painting session. It took him 10 days to finish and displays the features of a woman, with her arms extended, welcoming the community, Vargas says. She appears to be staring at anyone who looks at her, with her hair blowing in the city wind and a yellow border outlining her image.

“I painted the face that day, then the next, one girl’s hand, another girl’s hair, people who were randomly passing by, hence the name ‘Our Lady of DTLA.’ That’s my way of incorporating the community,” Vargas says.

Vargas always knew he was going to be an artist. He recalls a photo that was taken when he was nine years old in the front yard of his Boyle Heights home. In that photo, he is painting while positioned on the ground, the same as today.

Vargas has painted many murals around Los Angeles, such as the Eastside Luv mural in Boyle Heights, a mural at the Kinney Hotel in Venice and his most recent piece, the “Can’t Stop” portrait of Suicidal Tendencies vocalist Mike Muir, at 6th Street and Santa Fe Avenue in the Arts District.

He says he chooses his subjects by playing off his surroundings. He tries to inspire people and make his vision and art accessible to everybody –hoping to capture the beauty of communities through his paintings.

“When I’m pulling a mark, I’m pulling from a place of experience, love, pain and discovery,” he says.

His childhood environment sparked his creativity.

“Growing up in Boyle Heights was great because there was a lot of culture and multicultural influences there that inspired me,” he says.

At the recent DTLA Art Walk, Vargas selected an excited Joey Ching as his portrait subject for a charcoal painting on art paper he laid out on the sidewalk. He used charcoal to outline her facial features and paint to finish off the portrait.

“I don’t think Robert picks [just] anybody,” Ching says. “He is very selective, because he wants to tell a story, and he wants to broadcast that, not only to himself, but to the world. He was able to capture something that I felt as he looked into my eyes.”

Ic Lennon, who was at the DTLA event, says what initially captured his attention about Vargas’ work was his love for doing it live, “leaving room for endless possibilities.”

“He actually draws the people not only in an artistic way, but he definitely shows the personality of the person in his artwork.”

Lizet Vargas, whom the muralist (no relation) also painted during the Art Walk, agrees. “I love the fact that he goes off of people’s vibes,” she says. “He is very much about ‘Do I feel something with this person? What is capturing my attention?’”

Vargas paints at many public art events throughout L.A.

“When I’m drawing you, I’m really turning myself inside out so everyone gets to see a lot deeper in me,” Vargas says. “So it’s as much about me as the person that I’m drawing.”

One of his most recent murals was at San Marcos High School in Santa Barbara, which hired him to paint some of its alumni.

Working on murals is his primary source of income, with the starting point for a work $15,000. His compensation varies depending upon location and size.

Vargas enjoys having creative freedom as an artist, deciding what and whom he wants to paint. He uses social media to promote his art, with 14.3k Instagram followers and 1,093 Twitter followers.

He recently worked a 14-story, 30,000 square foot mural by Pershing Square in downtown L.A., which Vargas says will be the biggest mural painted by a single artist anywhere in the world.

Vargas’ formal arts education began at L.A. County High School for the Arts (LACHSA) where he graduated in 1996. He later attended Pratt Institute, where he majored in fine arts/painting.

Vargas wants to show aspiring artists that this way of life is possible.

“Whenever I paint, I’m not just drawing for me or even the pursuit of what I’m doing,” Vargas says. “I’m also drawing for where I come from.”