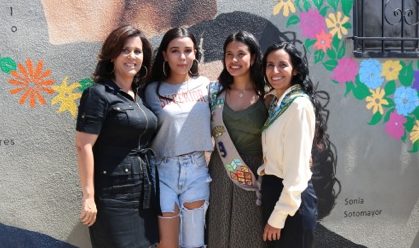 José Huízar’s  wife may be considering running for the 14th district council seat once he is termed out of the office.

The councilman tells the Los Angeles Times that his wife, Richelle Huízar, has expressed interested in running for his seat in 2020, when he finishes his third term and becomes ineligible to run for that position again.

Councilman Huízar said at a public event on Thursday that many community members have asked his wife to run and  that he would support her bid.

No woman has ever represented the district which, besides Boyle Heights, includes El Sereno and Lincoln Heights as well as parts of Highland Park and downtown Los Angeles. Currently two women, both Latinas representing sections of the San Fernando Valley, sit on the 15-person Los Angeles City Council: Nury Martínez from the 6th and Mónica Rodriguez from the 7th.

Two women ran against José Huízar the last time he was up for reelection, in 2015 –former Supervisor Gloria Molina and community activist Nadine Díaz.

Richelle Huízar has accompanied her politician husband at a number of public events in various parts of the district in recent weeks. The councilman played up his wife’s role in helping a young artist paint a mural in a public Boyle Heights wall this summer, giving her prominence and asking her to speak at a public unveiling in August.

The councilman told the newspaper that it should address questions about her candidacy directly to his wife but Richelle Huízar did not respond to the LA Times’ request for a comment.

Photo above: Richelle Huízar (left) at mural unveiling in August.