An updated revival of Josefina López’s “Real Women Have Curves” is opening the second season of the Gary Marshall Theatre in Burbank, where it runs through Nov. 18.

“Real Women Have Curves” follows a close-knit community of women in a tiny family-run factory as they traverse the political and social pressures of immigration and holding onto their heritage in East L.A. Fabric flies and tempers flare when central character Ana, fresh out of high school, rebels against the status quo with dreams of becoming a writer. 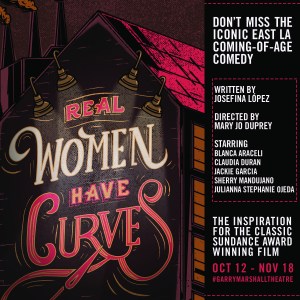 The new production of the Boyle Heights playwright’s semi-autobiographical coming of age comedy –first performed in 1990 and adapted into an award-winning film in 2002– is set in present day and features script updates that tackle current issues.

According to López and director Mary Jo DuPrey, the updates make “Real Women Have Curves” as relevant now as when it was first written.

“As women make strides in society and empower themselves, the standard of beauty has become more extreme and impossible,” López said in a press release. “It is shaming women into not demanding equality or speaking up about the abuse and exploitation of their bodies.”

The new production is led by an all-woman team, from the playwright and director  to the production designers and stage manager. The cast features Blanca Araceli, Claudia Durán, Jackie García, Sherry Mandujano and Julianna Stephanie Ojeda.

“Our superb cast will make you laugh, cry, think and appreciate the obstacles and triumphs of Latina life in America. I am honored to direct this classic American story,” said DuPrey in the release.

On Oct. 17, López launched a series of post-show conversations addressing some of the issues tackled in the play.

“The Garry Marshall Theatre is proud to help initiate these important conversations,” said Joseph Leo Bwarie, one of the institution’s artistic directors. “Josefina is an inspiration. Her strength and personal experiences will undoubtedly ignite thought-provoking and empowering dialogue. We’ve been so honored to work closely with her on our production and look forward to her interaction with the community.”

Upcoming dates and topics of the conversation are:

A new play by López is set to open next month at Casa 0101, the Boyle Heights theater she founded. “Remembering Boyle Heights” is said to be an “audience participatory… immersive theatrical celebration” about the “mythical and human dimensions of L.A.’s own Ellis Island of the West,” according to a promotional card for the production. It was “created and devised” by López, director Corky Domínguez and the ensemble cast of “Remembering Boyle Heights” and is scheduled to run Nov. 9 to Dec. 16.

“Real Women Have Curves” runs Thursday to Saturday at 8pm, Sunday at 3pm through Nov. 18, with select performances on Saturday Oct. 27 at 2pm, Sunday November 4 at 7:30pm, and Wednesday November 7 at 8pm. Tickets start at $52 and can be purchased by calling the Garry Marshall Theatre box office at 818-955-8101 or by visiting garrymarshalltheatre.org.