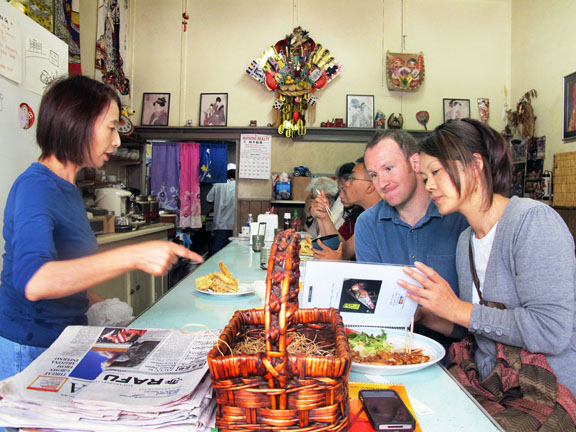 Fifty years ago, Boyle Heights had a large Japanese community, with restaurants, martial arts studios, and shops that met the community’s tastes. Today, the neighborhood is 94 percent Latino, and there are only a few remnants of its Japanese culture. One of the surviving landmarks ”“ and the only Japanese restaurant ”“ is Otomosian, which opened in 1956.

The first owners were the Seto family, who called it Otomi Café. The current owners, Yayoi Watanabe and Yulcishige Hamada, bought the restaurant and recipes in 2005 after the second owner died. Watanabe says she wanted to help keep alive the Japanese ties to Boyle Heights. “I thought it was important to have a Japanese restaurant in this area,” she says.

When entering the restaurant, the first thing that captures your attention is the small size. On a Saturday afternoon in June, the restaurant is at capacity, with 17 customers filling its four tables and five bar stools. “It’s a charming little spot here in Boyle Heights,” says Mark Crues, a customer.

Watanabe says her business has weathered the recent economic downturn because most of her customers are regulars, and many have been coming to the restaurant for decades. “I think that in the future, when the old people die, things will change,” she says.

People of Japanese or Chinese ancestry, most of them second- or third-generation Americans, make up about 20 percent of her customers. Fifty percent are Latino, and the rest are white or African American.

Many customers believe the co-owners are married, but they are just close friends. Both were born and raised in Japan. English is their second language, and they communicate with their customers mainly in English.

The co-owners share restaurant duties, with Watanabe cleaning, taking orders, and serving and Hamada cooking. While making his popular tempura, Hamada doesn’t take his eyes off the food as he uses chopsticks to move the pieces around. Looking serious, he moves his hands as fast as possible, making sure his food doesn’t overcook.

“The owners really put their hearts into this restaurant,” remarks Evan Shintan, a customer.
Watanabe serves the food. The rice comes in a white bowl, the chicken on a large flat plate, covered in teriyaki sauce. The crispy tempura is served on a separate medium-sized plate. A side salad comes with the meal.

The cozy environment is what keeps customers coming. “I think you feel like you’re in someone’s kitchen. It’s very homey,” said a customer who gave only her first name, Bianca.
Another customer, who identified herself only as June, said, “The flavor, it’s like my mom’s cooking, which I can’t get any more because she passed.”