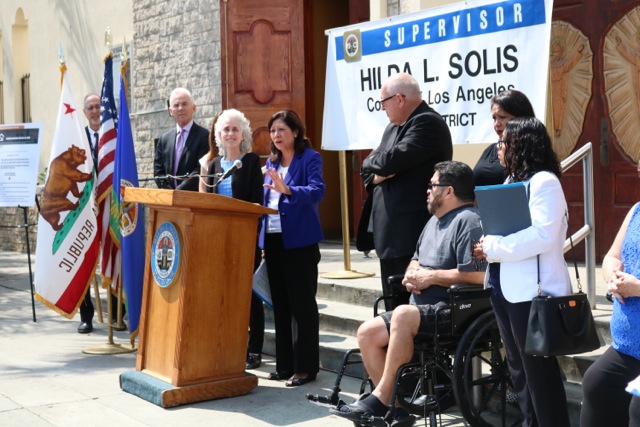 More than three-quarters of people living near the shuttered Exide plant in Vernon are concerned that they or someone in their household may get cancer as a result of living in their neighborhood.

That is one of the results of a community survey of nearly 4,000 homes in Boyle Heights, unincorporated East Los Angeles and the cities of Commerce, Bell, Maywood, Huntington Park and Vernon conducted last month by the Los Angeles County Department of Public Health. Three quarters of those surveyed also said that they are concerned that they or someone in their home might get lead poisoning and almost as many said that no one in their home has had their blood tested for lead.

“The results from the survey are alarming,” said County Supervisor Hilda Solís in a released statement. “For far too long, people around the Exide plant suffered the consequences of lead and other chemical contaminations.”

Solís, who presented the survey results on June 30 at a press conference at Resurrection Church in Boyle Heights, said the County would continue to pressure the state Department of Toxic Substances Control (DTSC) to hurry up the long-awaited cleanup of properties near Exide.

The survey results were announced a week before the DTSC unveiled its plan to clean the 2,500 most contaminated properties within a 1.7 mile radius of the closed battery recycling plant.

Solís warned that it was becoming apparent that the $176 million set aside by the state legislature for the cleanup might end up to be insufficient for what will be required to clean contamination by Exide.

“There’s more ominous work to be done,” Solís said at the conference, “but there is still money in Sacramento.

Some of the speakers at the press conference warned that many believe that contamination caused by the closed plant goes beyond the 1.7 mile radius and the 10,000 properties within the area.

“This is the largest population contaminated by lead in the entire country,” said Jane Williams, executive director of the California Committee Against Toxics. “Exide is a catastrophe. [The contamination] goes well beyond 1.7 miles.”

For its survey, county employees and volunteers attempted to speak to the residents of 21,000 homes in the targeted neighborhoods. On June 10, outreach teams knocked on doors of some 16,000 homes. About 70 percent of people who answered the doors agreed to complete the survey –either in English or Spanish– for a total of 4,214 completed surveys.

One of the more alarming survey results was that 48 percent of respondents said there were children under six years old who live or spent time in the home or yard. The Centers for Disease Control and Prevention say that exposure to lead is known to increase the risk of brain and nervous system damage to young children, slows their growth and development and causes learning, behavior, hearing and speech problems.

“We poison a child a day with lead, this is an emergency,” warned Williams.

Other findings of the study:

The former Exide Technologies battery recycling facility operated for decades without the necessary permit from the DTSC. It is known that the plant released lead, arsenic and other harmful chemicals into the air.