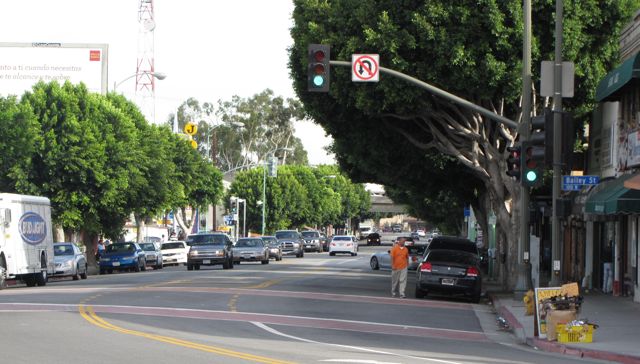 Victor Sifuentes takes his nightly trip around the block looking for parking after work with no luck.

Sifuentes, 45, is a life-long Boyle Heights resident who lives on the corner of Spence and Beswick streets just a couple of blocks away from where he grew up.

At 11 p.m., both streets had cars parked in every legal spot””not an uncommon occurrence in this neighborhood.

“If you come home later than eight o’clock around here, you might as well forget it,” said Sifuentes, a warehouse supervisor. “I work the swing-shift so by the time I get home, every spot is taken. It didn’t used to be like this before.”

Sifuentes refers to the ‘70s, and ‘80s when many people in the neighborhood owned and lived in their homes. But it’s not the same picture these days.

“Today, it seems that there are two to three families living on one property and each family has at least two cars,” said Sifuentes.

Sifuentes’ observations may have some ground. According to the Local Initiative Support Corporation (LISC), a local ownership advocacy group, only 11 percent of Boyle Heights residents own their home, as compared to 39 percent for the rest of Los Angeles. And with over 16,000 persons per square mile, it is among the most densely populated neighborhoods in the city.

Although data shows Boyle Heights has a rate of about 4 to 5 people per household, it’s hard to tell how many renters are crowded into single-family homes, since a number of them may live in unpermitted units. This can lead to a surplus of cars on the street, creating a tough parking situation for residents.

Fermin Vega, 88, is also a long-time resident of the neighborhood and has a problem with the number of people and cars near his home today.

“I have a driveway to use, but some of these people who live here illegally park wherever they please,” said Vega. “They always park so close to my driveway entrance that I’m afraid I’m going to hit one someday.”

Vega has lived in Boyle Heights for more than 53 years and can remember a time when the neighborhood had available parking for its residents. But now, Vega and Sifuentes notice people are either converting their garages or just renting them as is.

“I can remember when only one family lived in one house. I can go down the street, one-by-one, and tell you who is renting rooms, sheds and garages illegally in this neighborhood. It’s very sad to see,” said Vega.

There are times when vehicles block Vega’s driveway altogether, he says, causing him to jump a curb or drive over his lawn to get into his driveway.
He blames this on absentee owners.

“I think people who own around here just use their homes for rental income, and the more income, the better,” said Vega.

Even though he’s almost 90 years old, Vega has a remarkable memory and can recite past owners for nearly all the homes on the block, but that has changed today.

“I don’t know who lives here anymore. There are strange cars and strange people pulling up in front of my house at all hours. I no longer know who my neighbors are,” said Vega.
Sifuentes is frustrated about the city not doing anything about the problem.

He says that the only way to do something about someone who has blocked his driveway is to report it the Metropolitan Transit Authority.

“They will come out and either ticket the car, or tow it, that’s not the problem. The problem is that the owner of the vehicle will know that I called the MTA, and now I’ve made a new enemy.”

“I don’t need that in my life,” said Sifuentes.

“I guess they just figure that this is Boyle Heights and no one cares about the community enough to do something about the problem,’ said Vega.

Do you think Boyle Heights has a problem with overcrowding? What do you think should be done? Share your thoughts with us for a deeper story on this topic.

Gus Ugalde is a print journalist and Boyle Heights native. He is a graduate of both Salesian High School and East Los Angeles College. With writing as his passion, he has had over 500 stories published at several publications throughout Southern California.