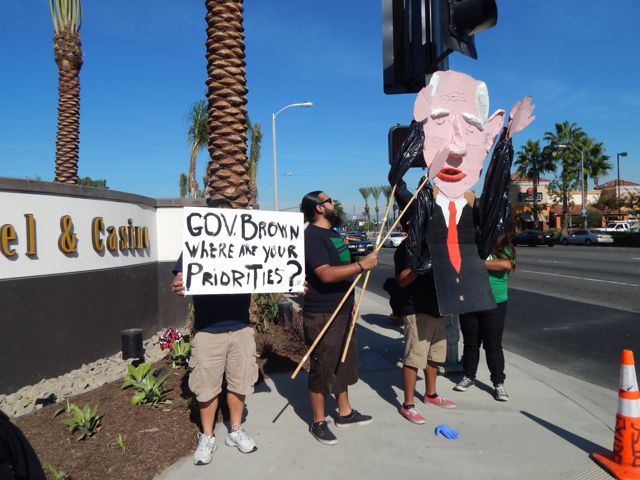 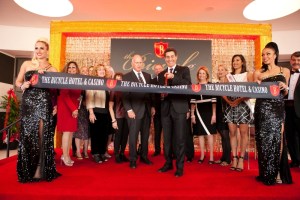 Governor Brown at the ribbon cutting ceremony at the Bicycle Hotel & Casino. PRNewsFoto

Brown spoke at the ceremony for the opening of a seven-story boutique hotel at the Bicycle Casino in Bell Gardens, but he had limited exposure to the protesters in front of the new hotel’s entrance on busy Eastern Avenue.

While he addressed officials, guests and media gathered at the entrance of the hotel, a small group of protesters a few hundred yards away chanted “Governor Brown, don’t mess around: toxic cleanup now” and carried signs that read “Exide state of emergency” and “10,000 homes contaminated.”

Some of the protesters carried a puppet effigy of the governor.

“We’re here today because Governor Brown is here to acknowledge the expansion of a casino in our communities, but hasn’t even acknowledged California’s biggest public health disaster, which is the lead contamination of 10,000 residential properties and the poisoning of over 100,000 people,” said Mark López, executive director of the East Yard Communities for Environmental Justice (EYCEJ), one of the groups organizing the protest. “He can come down here and try to collect some of this paper, some of these donations, but he can’t come and pick up this lead, he can’t come protect our house. We’re not going to stand for that.” 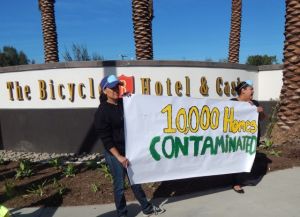 Community activists say that the state has been slow to test and clean lead contamination found in properties surrounding the Exide plant, shut down by the state in 2013. Authorities have said that arsenic and other toxic emissions from the plant increased the risk of cancer for about 100,000 residents in the surrounding communities.

In March, Exide agreed to close the plant permanently.

This month, the Department of Toxic Substances Control (DTSC)–the state agency charged with the cleanup– began notifying thousands of property owners in an expanded area around the shuttered plant that their yards may be contaminated with lead. The DTSC said in August that the contaminated area reached a 1.7-mile radius from the plant and potentially included some 10,000 homes in Boyle Heights, East Los Angeles, Maywood and Commerce.

KPCC reported this week that the DTSC sent out 2,800 letters and consent forms in English and Spanish to property owners in the expanded area and that the agency is getting ready to start cleaning lead from the soils at homes found to have the highest lead level.

This marks the beginning of a second phase of the state’s cleanup effort. Earlier this year, the DTSC cleaned about 200 homes closer to the plant in Maywood and Boyle Heights.

But at Wednesday’s rally, some of those community activists said the DTSC is not listening to their complaints about how the cleanup is being handled and how area residents and property owners are being notified. 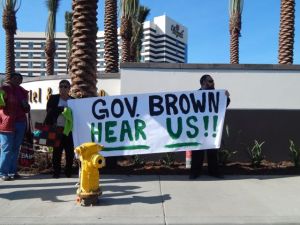 “They’re not listening to us. They never have answers for us,” said Terry Márquez, a Boyle Heights resident and member of the Exide Community Advisory Group that meets monthly with DTSC officials. “We complained that the houses being cleaned are not being cleaned correctly. There are no signs. They don’t alert the people.”

Exide has promised to pay $26 million for residential cleanup, of which nearly $9 million has already been spent. In August, the state Legislature pledged an additional $7 million, but López – the EYCEJ activist, who is also a member of the advisory group– said the cleanup may cost as much as $500 million.

“We want those 7 million dollars used immediately, but we need additional funds identified,” said López, as he walked with the Brown puppet. “We want to make sure this happens now, not 10 years from now.”

Last month, Brown signed a number of bills meant to increase the DTSC’s enforcement power. The measures will “strengthen penalties for repeat violations of hazardous waste laws and assist the DTSC with the recovery of cleanup costs,” the governor’s office said in a statement.

On Wednesday, a call to the governor’s office was referred to the DTSC, whose press office sent BHB a statement that said in part that “protecting the health of the community near the Exide facility is one of the [Brown] Administration’s highest priorities.”

The statement said that the agency would use the $7 million to clean up “more than 40 properties and [do] sampling at least 1,000 properties through the remainder of the fiscal year.” It added that “the sampling will inform us on how much cleanup and how much funding will be needed.”

“We will take every possible step to make Exide pay for the current work and all future work cleaning up their contamination, and we will keep the governor and the Legislature informed of the results and our progress,” the statement concluded.

Photo above: Protesters carry a puppet effigy of Governor Jerry Brown during rally at the opening of the Bicycle Hotel. Photo by Antonio Mejías-Rentas.